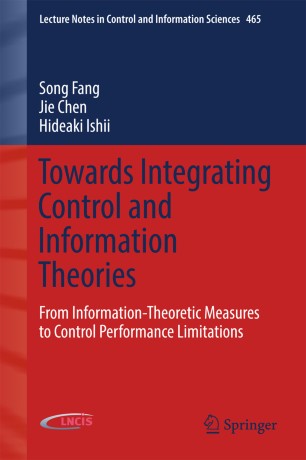 Towards Integrating Control and Information Theories

He visited the Tokyo Institute of Technology, Yokohama, Japan, as a visiting student researcher from January to April, 2013. His main research interests are in the integration of control theory and information theory, as well as in the inherent limits of the feedback mechanism, control and estimation systems, and signal processing.

Prior to joining City University, he was with School of Aerospace Engineering and School of Electrical and Computer Engineering, Georgia Institute of Technology, Atlanta, Georgia from 1990 to 1993, and with University of California, Riverside, California from 1994 to 2014, where he was a Professor and served as Professor and Chair for the Department of Electrical Engineering from 2001 to 2006. His main research interests are in the areas of linear multivariable systems theory, system identification, robust control, optimization, time-delay systems, networked control, and multi-agent systems.  He is the author of two books, respectively, (with G. Gu) Control-Oriented System Identification: An H-infinity Approach (Wiley-Interscience, 2000), and (with K. Gu and V.L. Kharitonov) Stability of Time-Delay Systems (Birkhauser, 2003).

An elected Fellow of IEEE, Fellow of AAAS, Fellow of IFAC and a Yangtze Scholar/Chair Professor of China, Dr. Chen was a recipient of 1996 US National Science Foundation CAREER Award, 2004 SICE International Award, and 2006 Natural Science Foundation of China Outstanding Overseas Young Scholar Award. He served on a number of journal editorial boards, as an Associate Editor and a Guest Editor for the IEEE Transactions on Automatic Control, a Guest Editor for IEEE Control Systems Magazine, an Associate Editor for Automatica, and the founding Editor-in-Chief for Journal of Control Science and Engineering. He is currently an IEEE Control Systems Society (CSS) Distinguished Lecturer and serves as an Associate Editor for SIAM Journal on Control and Optimization. He was a member on IEEE CSS Board of Governors in 2014 and has served as IEEE CSS Chapter Activities Chair since 2015.

Hideaki Ishii received the M.Eng. degree in applied systems science from Kyoto University, Kyoto, Japan, in 1998, and the Ph.D. degree in electrical and computer engineering from the University of Toronto, Toronto, ON, Canada, in 2002.

He was a Postdoctoral Research Associate with the Coordinated Science Laboratory at the University of Illinois at Urbana-Champaign, Urbana, IL, USA, from 2001 to 2004, and a Research Associate with the Department of Information Physics and Computing, The University of Tokyo, Tokyo, Japan, from 2004 to 2007. Currently, he is an Associate Professor in the Department of Computational Intelligence and Systems Science, Tokyo Institute of Technology, Yokohama, Japan. His research interests are in networked control systems, multiagent systems, hybrid systems, cyber security of power systems, and probabilistic algorithms.