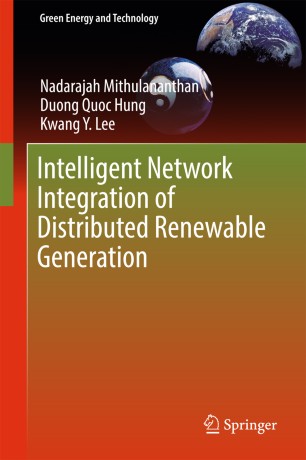 This book introduces several simple analytical approaches to aid the seamless integration of renewable distributed generation. It focuses on the idea of intelligent integration, which involves locating and developing suitable operational characteristics of renewable distributed generation. After reviewing the options available, the best location should be chosen, an appropriately sized operation should be installed and the most suitable operational characteristics should be adopted. Presenting these simple analytical approaches, their step-by-step implementation and a number of cases studies using test distribution systems, the book clearly demonstrates the technical, economic and environmental benefits of intelligent integration.

Nadarajah Mithulananthan received the Ph.D. degree in electrical and computer engineering from the University of Waterloo, Ontario, Canada, in 2002, the B.Sc. (Eng.) degree from the University of Peradeniya, Sri Lanka, in May 1993, and the M. Eng degree from the Asian Institute of Technology (AIT), Bangkok, Thailand, in August 1997. He was a planning engineer at the Generation Planning Branch of the Ceylon Electricity Board, and a project leader at Chulalongkorn University, Bangkok, Thailand. He is currently an associate professor with the University of Queensland (UQ), Brisbane, Australia. Prior to joining UQ, he was with the AIT, Bangkok, Thailand. At AIT he held several academic and administrative positions, including Coordinator of Energy Field of Study and Director of Regional Energy Resource Information Centre (RERIC). His research interests are the integration of renewable energy, electric vehicle, energy storage and power system stability and dynamics. Dr. Mithulan is a senior member of IEEE.
Duong Quoc Hung received the M. Eng. degree in electric power system management from the Asian Institute of Technology, Bangkok, Thailand in May 2008 and the Ph.D. degree in electrical engineering from the University of Queensland, Brisbane, Australia in October 2014. Since August 2014, he has been a postdoctoral research fellow in the School of Information Technology and Electrical Engineering at the University of Queensland, Brisbane, Australia and in the School of Electrical and Information Engineering at the University of Sydney, Sydney, Australia. Prior to joining academia, he has ten years of industry experience as an electrical engineer in a power distribution company. His research interests include load forecasting, uncertainty modelling, planning and operation of smart distribution networks with emerging technologies: distributed renewable energy, energy storage and electric vehicles.
Kwang Y. Lee received the B.S. degree in Electrical Engineering in 1964 from Seoul National University, M.S. degree in Electrical Engineering in 1968 from North Dakota State University, and Ph. D. degree in Systems Science in 1971 from Michigan State University. He was elected as a Fellow of IEEE in January 2001 for his contributions to the development and implementation of intelligent system techniques for power plants and power systems control. He has been working in the area of power systems control for over thirty years at Michigan State, Oregon State, U. of Houston, Penn State, and Baylor University, where he is currently Professor and Chair of the Electrical and Computer Engineering Department. Dr. Lee has served as Editor of IEEE Transactions on Energy Conversion, Associate Editor of IEEE Transactions on Neural Networks, and Associate Editor of IFAC Journal on Control Engineering Practice. He is currently serving as the Chair of the IFAC Power & Energy Technical Committee and IEEE PES Working Group on Modern Heuristic Optimization Techniques. His research interests include control, operation, and planning of power and energy systems; intelligent control and their applications to power and energy systems; and modeling, simulation and control of micro-grids with renewable and distributed energy sources.