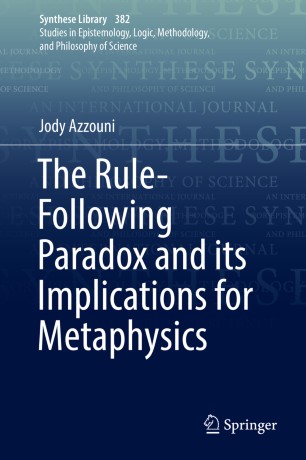 The Rule-Following Paradox and its Implications for Metaphysics

This monograph presents Azzouni’s new approach to the rule-following paradox. His solution leaves intact an isolated individual’s capacity to follow rules, and it simultaneously avoids replacing the truth conditions for meaning-talk with mere assertability conditions for that talk.

Azzouni summarizes and develops Kripke’s original version of Wittgenstein’s rule-following paradox to make salient the linchpin assumptions of the paradox. By doing so, Azzouni reveals how compelling Kripke’s earlier work on the paradox was. Objections raised over the years by Fodor, Forbes Ginsborg, Goldfarb, Tait, Wright, and many others, are all shown to fail. No straight solution (a solution that denies an assumption of the paradox) can be made to work. Azzouni illustrates this in detail by showing that a popular family of straight solutions due to Lewis and refined by Williams, “reference magnetism,” fail as well. And yet an overlooked sceptical solution is still available in logical space. Azzouni describes a series of “disposition-meaning” private languages that he shows can be successfully used by a population of speakers to communicate with one another despite their ideolectical character. The same sorts of languages enable solitary “Robinson Crusoes” to survive and flourish in their island habitats. These languages—sufficiently refined—have the same properties normal human languages have; and this is the key to solving the rule-following paradox without sacrificing the individual’s authority over her self-imposed rules or her ability to follow those rules.