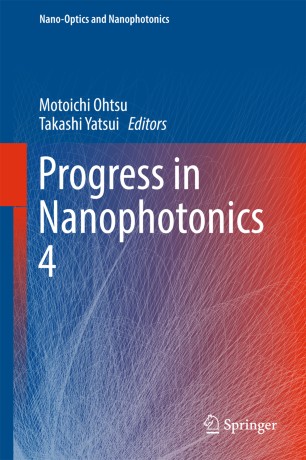 This book presents the recent progress in the field of nanophotonics. It contains review-like chapters focusing on various but mutually related topics in nanophotonics written by the world’s leading scientists. Following the elaboration of the idea of nanophotonics, much theoretical and experimental work has been carried out, and several novel photonic devices, high-resolution fabrication, highly efficient energy conversion, and novel information processing have been developed in these years. Novel theoretical models describing the nanometric light-matter interaction, nonequilibrium statistical mechanical models for photon breeding processes and near-field‐assisted chemical reactions as well as light‐matter interaction are also explained in this book. It describes dressed photon technology and its applications, including implementation of nanophotonic devices and systems, fabrication methods and performance characteristics of ultrathin, ultraflexible organic light‐emitting diodes, organic solar cells and organic transistors.

Motoichi Ohtsu was professor at the Tokyo Institute of Technology, Graduate School of Interdisciplinary Science and Engineering, from 1991 to 2004. He has been Director at the Nanophotonics Research Center of the University of Tokyo since 2008. In addition, he has been a professor at the Department of Electronics Engineering, Graduate School of Engineering, of the University of Tokyo since 2004.
Prof. Takashi Yatsui got the Dr. degree in electronics engineering from Tokyo Inst. Tech. in 2000. He was employed as  a researcher at Japan Science and Technology Agency (2000‐2008), and as associate professor at Univ. Tokyo since 2008. For his excellent research he got awards from the JSAP (2000), Tejima Doctoral Dissertation Award (2001), the Gottfried Wagener Prize (2011), Osaka University Kondo Prize (2012), Erlangen Innovation Award Optical Technologies (2012), The Ichimura Prize in Science for Distinguished Achievement (2016).