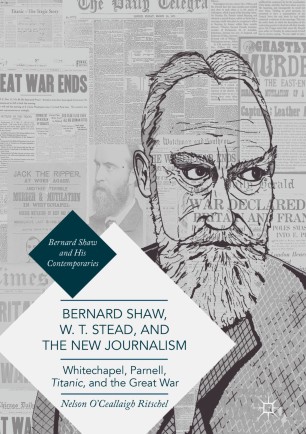 This book explores Bernard Shaw’s journalism from the mid 1880s through the Great War—a period in which Shaw contributed some of the most powerful and socially relevant journalism the western world has experienced. In approaching Shaw’s journalism, the promoter and abuser of the New Journalism, W. T. Stead, is contrasted to Shaw, as Shaw countered the sensational news copy Stead and his disciples generated. To understand Shaw’s brand of New Journalism, his responses to the popular press’ portrayals of high profile historical crises are examined, while other examples prompting Shaw’s journalism over the period are cited for depth: the 1888 Whitechapel murders, the 1890-91 O’Shea divorce scandal that fell Charles Stewart Parnell, peace crusades within militarism, the catastrophic Titanic sinking, and the Great War. Through Shaw’s journalism that undermined the popular press’ shock efforts that prevented rational thought, Shaw endeavored to promote clear thinking through the immediacy of his critical journalism. Arguably, Shaw saved the free press.