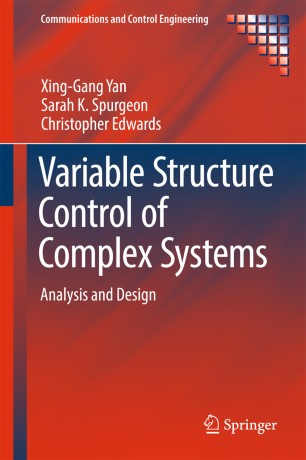 This book systematizes recent research work on variable-structure control. It is self-contained, presenting necessary mathematical preliminaries so that the theoretical developments can be easily understood by a broad readership.

The text begins with an introduction to the fundamental ideas of variable-structure control pertinent to their application in complex nonlinear systems. In the core of the book, the authors lay out an approach, suitable for a large class of systems, that deals with system uncertainties with nonlinear bounds. Its treatment of complex systems in which limited measurement information is available makes the results developed convenient to implement. Various case-study applications are described, from aerospace, through power systems to river pollution control with supporting simulations to aid the transition from mathematical theory to engineering practicalities.

The book addresses systems with nonlinearities, time delays and interconnections and considers issues such as stabilization, observer design, and fault detection and isolation. It makes extensive use of numerical and practical examples to render its ideas more readily absorbed.

Variable-Structure Control of Complex Systems will be of interest to academic researchers studying control theory and its application in nonlinear, time-delayed an modular large-scale systems; the robustness of its approach will also be attractive to control engineers working in industries associate with aerospace, electrical and mechanical engineering.

Dr Xinggang Yan received the BSc and MSc degrees from the Shaanxi Normal University and Qufu Normal University, respectively, and received the PhD degree in Control Engineering from the Northeastern University, China. He was a Postdoctoral Research Fellow or Research Associate in China, Hong Kong, Singapore and United Kingdom. Currently, he is a Senior Lecturer in the School of Engineering and Digital Arts in the University of Kent, United Kingdom. He is a member of IEEE. He has published more than 140 refereed papers and two books in the area of control theory and applications. His research interest includes nonlinear control, sliding mode control, decentralized control, time delay systems, observer design and fault detection and isolation with applications.

Professor Sarah K. Spurgeon received the BSc and DPhil degrees from the University of York, UK. She has held academic positions at the University of Loughborough, the University of Leicester and the University of Kent in the UK and is currently Professor of Control Engineering and Head of the Department of Electronic and Electrical Engineering at University College London. She is a member of the Editorial Board of the International Journal of Systems Science, a member of the Editorial Board of the IET Proceedings D, a Subject Editor for the International Journal of Robust and Nonlinear Control and an Editor of the IMA Journal of Mathematical Control and Information. Her research interests are in the area of systems modelling and analysis, robust control and estimation in which areas she has published over 290 refereed research papers. She is a Fellow of the Royal Academy of Engineering, a Fellow of the IET, a Fellow of the IMA and a Fellow of the InstMC. She was awarded the Honeywell International Medal for ‘distinguished contribution as a control and measurement technologist to developing the theory of control’ in 2010 and an IEEE Millenium Medal in 2000.

Professor Christopher Edwards is Professor of Control Engineering in the College of Engineering, Mathematics and Physical Sciences at the University of Exeter. Between 1996-2102 he was a member of the Control Systems Group in the Engineering department at Leicester University. He is the author of over 325 refereed papers, 14 chapter contributions to edited monographs and four books. In 2006, Prof. Edwards was awarded a Royal Academy of Engineering/Leverhulme Senior Research Fellowship to conduct research in the area of ‘Sliding mode observers for fault detection, isolation and sensor fault tolerant control in micro/nano-satellites’. He is a subject editor for the International Journal of Nonlinear Control and an associated editor for the International Journal of Systems Science. He is currently the vice-chair of the IEEE Technical Committee on Variable Structure Systems.

“In this book the authors present their recent results on the application of variable structure control methods to nonlinear systems where uncertainties, time delays and coupling play a fundamental role. … The design of each control law is clearly presented, and while performing a rigorous stability analysis of the closed-loop system, the authors complement their results with several examples, helping readers understand the scope for application.” (Laura Levaggi, Mathematical Reviews, December, 2017)
Buy options