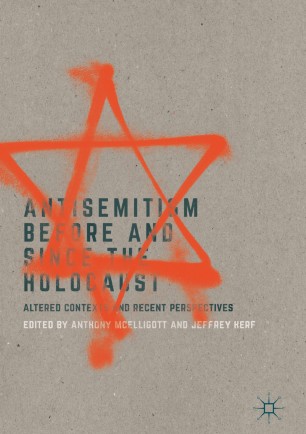 Antisemitism Before and Since the Holocaust

Divided into five discrete sections, this book not only broaches the issue of Islamist denial of the Holocaust in the Middle East but also attempts to understand the Western paradox by looking at antisemitism before and since the Holocaust in Europe and the United States. It thus offers both a historical and contemporary perspective. This volume includes observations by leading scholars, delivering powerful, even controversial essays by scholars who are reporting from the ‘frontline.’ It offers a discussion on the relationship between Christianity and Islam, as well as the historical and contemporary issues of antisemitism in the USA, Europe, and the Middle East. This book explores how all of these issues contribute consciously or otherwise to contemporary antisemitism. The chapters of this volume do not necessarily provide a unity of argument – nor should they. Instead, they expose the plurality of positions within the academy and reflect the robust discussions that occur on the subject.

“This book, as the title suggests, is an analysis of antisemitism both before the Holocaust and after. … This book was an excellent analysis of this issue. While some would deny that the Holocaust happened, this could not be further from the truth. The Holocaust was one of the most poignant events of human history in religion. This book did a good job analyzing antisemitism for what it is: racism.” (Justin Dilliplane, Resolved for Christ, resolvedfc.blogspot.de, January, 2018)
Buy options