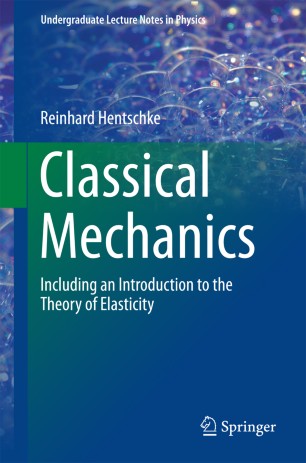 Including an Introduction to the Theory of Elasticity

This textbook teaches classical mechanics as one of the foundations of physics. It describes the mechanical stability and motion in physical systems ranging from the molecular to the galactic scale. Aside from the standard topics of mechanics in the physics curriculum, this book includes an introduction to the theory of elasticity and its use in selected modern engineering applications, e.g. dynamic mechanical analysis of viscoelastic materials. The text also covers many aspects of numerical mechanics, ranging from the solution of ordinary differential equations, including molecular dynamics simulation of many particle systems, to the finite element method. Attendant Mathematica programs or parts thereof are provided in conjunction with selected examples. Numerous links allow the reader to connect to related subjects and research topics. Among others this includes statistical mechanics (separate chapter), quantum mechanics, space flight, galactic dynamics, friction, and vibration spectroscopy. An introductory chapter compiles all essential mathematical tools, ranging from coordinates to complex numbers. Completely solved problems and examples facilitate a thorough understanding of the material.

His research interests have frequently straddled the boundary between physics and chemis­try. Early work as a Diplom and Ph.D. student has focused on surface physics, dealing with topics in molecule/ion-surface collisions and surface phase transitions. During his postdoctoral years the focus shifted to theoretical physical chemistry of reversible molecular aggrega­tion as found in micellar and protein systems and the attendant liquid crystalline phase be­havior. As a scientist at the Max-Planck Institute for Polymer Research he has concen­trated on computer modelling of polymers.

Subsequent work has been a synthesis of these earlier fields. His group has concentrated on (a) the theoretical investigation of sorption in polymer networks, using computer simulation methods and lattice theory; (b) reversible self-assembly and phase behavior of equilibrium polymers, using again a combi­nation of computer simulation and analytical theory; (c) dielectric properties in conjunc­tion with the structural phase behavior of dipolar fluids; (d) the development of computer algorithms for molecular modelling. Recently he has become interested in theoretical problems encountered in elastomer technology.

“This textbook on classical mechanics is intended for physics students, who encounter the subject as a part of their undergraduate curriculum in theoretical physics. However it could be used in Mechanics courses for Engineering students as well. … I stress that the book is a welcome addition to the textbooks on Classical Mechanics and I strongly recommend it for Physics and Engineering students.” (Teodor Atanacković, zbMATH 1364.70002, 2017)
Buy options