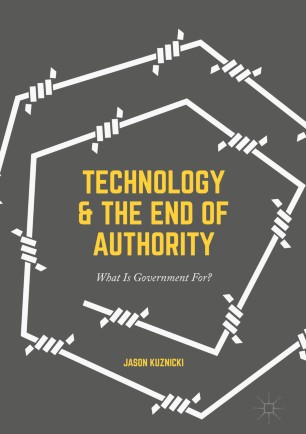 Technology and the End of Authority

What Is Government For?

This book provides a critical survey of Western political philosophy from a classical liberal perspective, paying particular attention to knowledge problems and the problem of political authority. Its central argument is that the state is a tool for solving a historically changing set of problems, and that, as a tool, the state is frequently deficient on both moral and practical grounds. Government action can be considered as a response to a set of problems, all of which may conceivably be solved in some other manner as well. The book examines in particular the relationship between the state and technology over time. Technological developments may make the state more or less necessary over time, which is a consideration that is relatively new in the history of political philosophy, but increasingly important. The book is organized chronologically and concludes with an essay on trends in the history of political philosophy, as well as its surprisingly bright prospects for future development.

Jason Kuznicki is Research Fellow at the Cato Institute, USA, and editor of Cato Unbound. He obtained his PhD in intellectual history from Johns Hopkins University, USA.