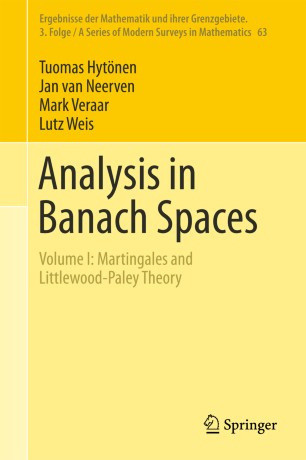 Volume I: Martingales and Littlewood-Paley Theory

The present volume develops the theory of integration in Banach spaces, martingales and UMD spaces, and culminates in a treatment of the Hilbert transform, Littlewood-Paley theory and the vector-valued Mihlin multiplier theorem.

Over the past fifteen years, motivated by regularity problems in evolution equations, there has been tremendous progress in the analysis of Banach space-valued functions and processes.

The contents of this extensive and powerful toolbox have been mostly scattered around in research papers and lecture notes. Collecting this diverse body of material into a unified and accessible presentation fills a gap in the existing literature. The principal audience that we have in mind consists of researchers who need and use Analysis in Banach Spaces as a tool for studying problems in partial differential equations, harmonic analysis, and stochastic analysis. Self-contained and offering complete proofs, this work is accessible to graduate students and researchers with a background in functional analysis or related areas.

Jan van Neerven is Professor of Analysis at Delft University of Technology. Author of more than 100 research papers and two monographs, he is a leading expert in Operator Theory and Stochastic Analysis. He held post-doctoral positions at Caltech and Tübingen University. He was awarded a Human Capital and Mobility fellowship, a fellowship of the Royal Dutch Academy of Arts and Sciences, and VIDI and VICI subsidies from the Netherlands Organisation for Scientific Research.

Mark Veraar is Associate Professor at Delft University of Technology. Author of over 40 research papers, he is a leading researcher in the theory of evolution equations and stochastic partial differential equations. He held post-doctoral positions at the Universities of Warsaw and Karlsruhe, the latter with a Alexander von Humboldt Fellowship. He is the recipient of VENI and VIDI grants from the Netherlands Organisation for Scientific Research.

Lutz Weis, a Professor at Karlsruhe Institute of Technology, is a senior researcher in operator theory and evolution equations. He has published over 80 research papers and a monograph. Since receiving his PhD from University of Bonn, he was a professor at Louisiana State University and visiting professor at TU Berlin as well as Universities of Kiel, South Carolina and Minnesota. He organized a Marie Curie training site and is currently a member of a DFG Graduiertenkolleg.

“The book can be used not only as a reference book but also as a basis for advanced courses in vector-valued analysis and geometry of Banach spaces. This monograph can be studied for different motivations, it clearly goes straight to the core and introduces only those concepts that will be needed later on, but makes detailed proofs, so it can be used as a textbook for students or as a book for researchers … .” (Oscar Blasco, zbMATH, Vol. 1366.46001, 2017)
Buy options