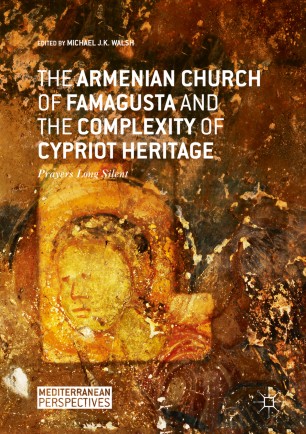 The Armenian Church of Famagusta and the Complexity of Cypriot Heritage

This book explores seven centuries of changing fortunes for Cyprus through the Famagusta region and examines the Eastern Mediterranean world through the lens of the Armenian Church as a ‘constant’. An examination of the society through art, architecture, archives, and ‘hard sciences’ escorts the reader from the era of the crusades, through the rise and fall of empires, to the political stasis of the present day. From the wealth and influence of the French Lusignans, via the artistry and military ingenuity of Venetian renaissance, followed by the silence of three centuries of Ottoman rule then incorporation into British Empire, the book examines seven centuries of change in the Eastern Mediterranean and on the island of Cyprus. Recently, as late as the 1970s, the Armenian Church even became home for displaced villagers during the inter-ethnic problems that plagued the post-independence era and led in turn to the Turkish intervention of 1974, after which it became a military storage facility and eventually fell into abandonment. Through an analysis of this society, this book represents a first history into the Armenian community from the 14th century to present and a probing analysis into the art and architecture it left behind.

Michael J. K. Walsh, who led this project, has edited and co-edited several books on Famagusta, including Medieval and Renaissance Famagusta (2012), Crusader to Venetian Famagusta (2014) and City of Empires: Ottoman and British Famagusta (2015). He is Associate Professor of Art History in the School of Art, Design and Media at Nanyang Technological University, Singapore.