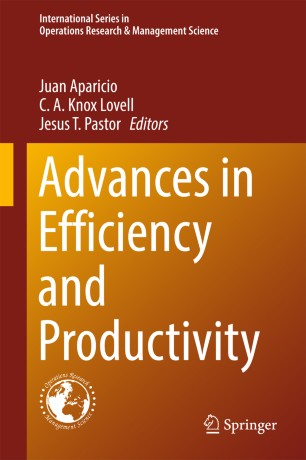 Advances in Efficiency and Productivity

This book grows from a conference on the state of the art and recent advances in Efficiency and Productivity.  Papers  were commissioned from leading researchers in the field, and include eight explorations into the analytical foundations of efficiency and productivity analysis.  Chapters on modeling advances include reverse directional distance function, a new method for estimating technological production possibilities, a new distance function called a loss distance function, an analysis of productivity and price recovery indices, the relation of technical efficiency measures to productivity measures, the implications for benchmarking and target setting of imposing weight restrictions on DEA models, weight restrictions in a regulatory setting, and the Principle of Least Action.

Chapters on empirical applications include a study of innovative firms that use innovation inputs to produce innovation outputs, a study of the impact of potential “coopetition” or cooperation among competitors on the financial performance of European automobile plants, using SFA to estimate the eco-efficiency of dairy farms in Spain, a DEA bankruptcy prediction model, a combined stochastic cost frontier analysis model/mixture hazard model, the evolution of energy intensity in nine Spanish manufacturing industries, and the productivity of US farmers as they age.

Juan Aparicio is a Lecturer in the Department of Statistics, Mathematics and Computer Science at the Operations Research Center of University Miguel Hernandez, Alicante, Spain.  He earned his Ph.D. in Statistics in 2007 at the UMH.  He is Co-Chair (with Lovell Knox) of the Santander Chair on Efficiency and Productivity.  His research interests include Efficiency and Productivity Analysis and Game Theory.

C. A. Knox Lovell is Honorary Professor with the Centre for Efficiency and Productivity Analysis in the School of Economics at the University of Queensland. He served as editor-in-chief of the Journal of Productivity Analysis for a decade. He has authored several books, including Production Frontiers (with Färe and Grosskopf) and Stochastic Frontier Analysis (with Kumbhakhar) for Cambridge University Press.

Jesus T. Pastor is a Professor in the Department of Statistics, Mathematics and Informatics at the Operations Research Center of University Miguel Hernandez, Alicante, Spain.  He earned his Bachelor’s, Master, and Ph.D., all in Mathematics, at the University of Valencia, and was awarded as one of the three most relevant Spanish Scientists of 2013 by the Scientific Spanish Association.  His research interests are in Productivity and Efficiency, Statistics, and Informatics.