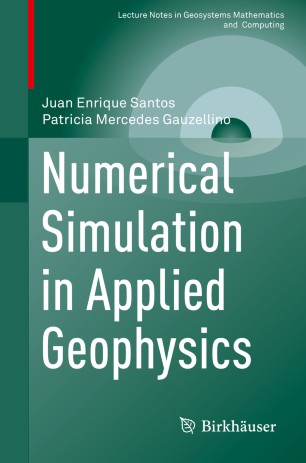 This book presents the theory of waves propagation in a fluid-saturated porous medium (a Biot medium) and its application in Applied Geophysics. In particular, a derivation of absorbing boundary conditions in viscoelastic and poroelastic media is presented, which later is employed in the applications.

The partial differential equations describing the propagation of waves in Biot media are solved using the Finite Element Method (FEM).

Waves propagating in a Biot medium suffer attenuation and dispersion effects. In particular the fast compressional and shear waves are converted to slow diffusion-type waves at mesoscopic-scale heterogeneities (on the order of centimeters), effect usually occurring in the seismic range of frequencies.

In some cases, a Biot medium presents a dense set of fractures oriented in preference directions. When the average distance between fractures is much smaller than the wavelengths of the travelling fast compressional and shear waves, the medium behaves as an effective viscoelastic and anisotropic medium at the macroscale.

The book presents a procedure determine the coefficients of the effective medium employing a collection of time-harmonic compressibility and shear experiments, in the context of Numerical Rock Physics. Each experiment is associated with a boundary value problem, that is solved using the FEM.

This approach offers an alternative to laboratory observations with the advantages that they are inexpensive, repeatable and essentially free from experimental errors.

The different topics are followed by illustrative examples of application in Geophysical Exploration. In particular, the effects caused by mesoscopic-scale heterogeneities or the presence of aligned fractures are taking into account in the seismic wave propagation models at the macroscale.

The numerical simulations of wave propagation are presented with sufficient detail as to be easily implemented assuming the knowledge of scientific programming techniques.

Juan Enrique is professor at the Department of Mathematics, Purdue University, USA.

“Readers are provided not only with exhaustive descriptions of the underlying theory but also with abundant detail about the computations required to produce the book’s many illustrative examples. … book is illustrated with fine color figures, which effectively illustrate the mathematics used to produce them. … key reference for those actively working in this area as well as for those like myself, who on occasion should recall that our real earth is neither perfectly elastic, nor perfectly homogeneous and isotropic.” (Sven Treitel, The Leading Edge, October, 2017)
“The detailed illustrations and equally detailed descriptions of the examples are an effective way to guide the geophysical community to an understanding of the main features of the theory’s applications and of the noteworthy numerical results. Thus, while the book is a quite valuable reference work for specialists, it also turns out to be an excellent reference for those working in other areas of geophysical research.” (Oscar Lovera, The Leading Edge, October, 2018)
“This book is a great addition to the collection of books on wave propagation and numerical simulations. … we find the book to be a very useful read and would recommend it to students and researchers actively working in the area. This book is certainly an important reference that provides a succinct description of numerical simulations of wave propagation in real media.” (Mrinal K. Sen and Janaki Vamaraju, The Leading Edge, October, 2018)
Buy options