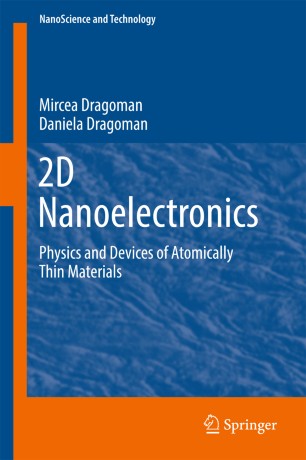 This book is dedicated to the new two-dimensional one-atomic-layer-thick materials such as graphene, metallic chalcogenides, silicene and other 2D materials. The book describes their main physical properties and applications in nanoelctronics, photonics, sensing and computing. A large part of the book deals with graphene and its amazing physical properties.  Another important part of the book deals with semiconductor monolayers such as MoS2 with impressive applications in photonics, and electronics. Silicene and germanene are the atom-thick counterparts of silicon and germanium with impressive applications in electronics and photonics which are still unexplored. Consideration of two-dimensional electron gas devices conclude the treatment. The physics of  2DEG is explained in detail and the applications in THz and IR region are discussed.
Both authors are working currently on these 2D materials developing theory and applications.

Mircea Dragoman was born in Bucharest in 1955. He graduated the Polytechnical Institute in Bucharest, Electronic Faculty, in 1980. He received the doctoral degree in electronics in 1991. He is a senior researcher I at the National Research Institute in Microtechnologies, since 1996. He is teaching since 2008 at Univ. Poltehnica Bucharest ,Romania a course termed Advanced Technological Processes which related to nanotechnologies and advanced materials. He has realized the first carbon nanotube and graphene devices and circuits for high frequency applications enriching the novel area of Carbon-based Electronics. In the period 1992-1994 he was the recipient of the Humbold Fellowship award and he has followed postdoctoral studies at Duisburg University, Germany. He was invited professor at : CNR- Istituto di Electtronica dello Stato Solido-Roma (1996), Univ. Saint-Etienne –Franta (1997), Univ. Mannheim (1998-1999, 2001-2002), Univ. Frankfurt  (2003), Univ. Darmstadt (2004); in the period 2005-2006, 2008-2010  he was nominated directeur de recherche at CNRS LAAS Toulouse. He has published more than 250 scientific papers in the following areas : nanoelectronics, microwaves, MEMS, optoelectronics. He eceived the “Gheorghe Cartianu” award of the Romanian Academy in 1999.He is co-author of the following books: D. Dragoman, M. Dragoman “Advanced Optoelectronic Devices”, Springer (1999),D. Dragoman, M. Dragoman, “Optical Characterization of Solids, Springer (2002),

Daniela Dragoman graduated the University of Bucharest, Physics Faculty, in 1989 and received the PhD degree from the University of Limerick, in 1993. She is Professor at the Physics Faculty, University of Bucharest. She teaches Solid State Physics and Nanophysics courses at the undergraduate and postgraduate levels. Her areas of interests include the physics and applications of nanostructures, with a particular emphasis of carbon nanotubes and graphene, and modeling of quantum nanoscale devices. She was the recipient of the Alexander von Humboldt fellowship during Feb. 1998-June 1999 and Sept. 2001-March 2002, when she worked at the Univ. of Mannheim, Germany, and occupied the position of Directeur de Recherche at LAAS-CNRS, Toulouse, France during July-September 2008, 2009, and 2010. She was also visiting professor at several universities in France, Germany, and Italy.
Daniela Dragoman has published more than 270 scientific papers in areas including quantum and classical optics, quantum mechanics, and nanostructures. She co-authored the books Advanced Optoelectronic Devices (1999), Optical Characterization of Solids (2002), Quantum-Classical Analogies (2004) and Bionanoelectronics (2012, with an edition in 2014 at China Science Publishing and Media Inc.) published by Springer, and Nanoelectronics: Principles and Devices (1st edition in 2006 and 2nd edition in 2008) published by Artech House, as well as other book chapters. She received the “Gheorghe Cartianu” award of the Romanian Academy in 1999, for the book Advanced Optoelectronic Devices (Springer).

“This is an outstanding book covering a range of nanodevices based on 2D materials. … The written material is augmented with many excellent fi gures, diagrams, illustrations, and images. I strongly recommend this book to researchers interested in device fabrication based on 2D materials.” (K. Kamala Bharathi, MRS Bulletin, Vol. 43, May, 2018)
Buy options