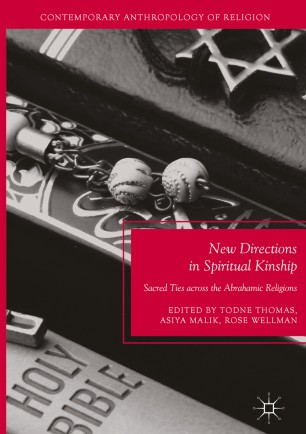 Sacred Ties across the Abrahamic Religions

Part of the Contemporary Anthropology of Religion book series (CAR)

This volume examines the significance of spiritual kinship—or kinship reckoned in relation to the divine—in creating myriad forms of affiliations among Christians, Jews, and Muslims.  Rather than confining the study of spiritual kinship to Christian godparenthood or presuming its disappearance in light of secularism, the authors investigate how religious practitioners create and contest sacred solidarities through ritual, discursive, and ethical practices across social domains, networks, and transnational collectives.  This book’s theoretical conversations and rich case studies hold value for scholars of anthropology, kinship, and religion.

Todne Thomas is Assistant Professor of Religion at the University of Vermont, USA.

Asiya Malik is an anthropologist and independent researcher in Canada.

Rose Wellman is an anthropologist and postdoctoral researcher at Princeton University, USA.

“This is an impressive collection that sets out a vital new approach to the study of the intersection between religion and kinship.  Moving far beyond longstanding discussions of godparenthood to consider the many diverse ways the sacred shapes notions of relatedness both between persons and between people and the divine across the Abrahamic traditions, the volume breaks new ground in several fields and will interest a wide range of scholars in the social sciences and humanities.” (Joel Robbins, Sigrid Rausing Professor of Social Anthropology, University of Cambridge, UK)

“This work is a fresh, timely, and original intervention; a series of rich essays which deftly show the intrinsic connections between kinship and religion. At the same time, it offers a productive framework for comparing the quarrelsome family of traditions descended from ‘father’ Abraham.” (Michael Lambek, Professor of Anthropology, University of Toronto, Canada)