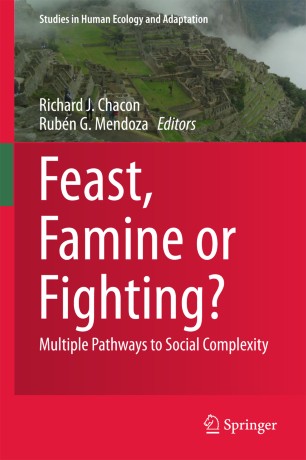 Part of the Studies in Human Ecology and Adaptation book series (STHE, volume 8)

However, recent approaches such as the inclusion of bioarchaeological perspectives, prospection methods, systematically-investigated archaeological sites along with emerging technologies are necessarily transforming our understanding of socio-cultural evolutionary processes. In short, many pre-existing ways of explaining the origins and development of social complexity are being reassessed.

Ultimately, the contributors to this edited volume challenge the status quo regarding how and why social complexity arose by providing revolutionary new understandings of social inequality and socio-political evolution.

Richard J. Chacon is an Associate Professor of Anthropology at Winthrop University. He has conducted ethnographic fieldwork in Amazonia among the Yanomamo of Venezuela, the Yora of Peru and the Achuar (Shiwiar) of Ecuador. In the Andes, he has conducted ethnographic fieldwork among the Otavalo and Cotacachi Indians of Highland Ecuador. His research interests include collective action, optimal foraging theory, indigenous subsistence strategies, natural resource conservation, warfare, belief systems, the development of social complexity, ethnohistory, ethics and the effects of globalization on indigenous peoples.

Dr. Rubén G. Mendoza is Professor and Chair of the Division of Social, Behavioral, and Global Studies at the California State University, Monterey Bay. He has conducted archaeological and ethnohistorical investigations in California, Colorado, the US Southwest, and Mesoamerica. His research interests include Mesoamerican and South American civilizations and social complexity, long-distance trade and exchange, conflict interaction, and Hispanicized Indian and Amerindian traditional technologies and material cultures. In addition, he is the coordinator for both the Archaeological Science, Technology, and Visualization, and Global Studies, programs at CSU Monterey Bay.