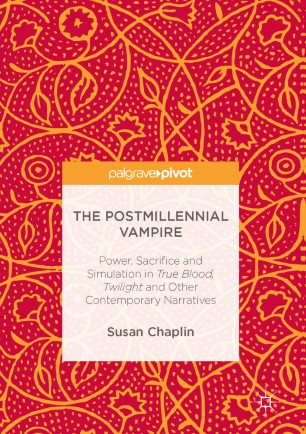 Power, Sacrifice and Simulation in True Blood, Twilight and Other Contemporary Narratives

This book explores the idea that while we see the vampire as a hero of romance, or as a member of an oppressed minority struggling to fit in and acquire legal recognition, the vampire has in many ways changed beyond recognition over recent decades due to radically shifting formations of the sacred in contemporary culture. The figure of the vampire has captured the popular imagination to an unprecedented extent since the turn of the millennium. The philosopher René Girard associates the sacred with a communal violence that sacred ritual controls and contains. As traditional formations of the sacred fragment, the vampire comes to embody and enact this ‘sacred violence’ through complex blood bonds that relate the vampire to the human in wholly new ways in the new millennium.
Susan Chaplin specialises in Romanticism and Gothic Literature from the eighteenth century to the present. She has published extensively in these fields. Her works include The Gothic and the Rule of Law, 1764-1820, Gothic Literature: Texts, Contexts, Connections, The Romanticism Handbook (edited with Professor Joel Faflak), The Frankenstein Workbook, and Law, Literature and the Sublime in Eighteenth-Century Women’s Fiction.