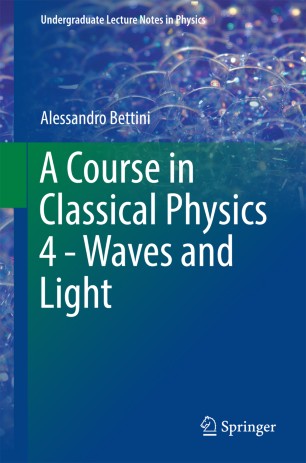 A Course in Classical Physics 4 - Waves and Light

This fourth volume of a four-volume textbook covers the oscillations of systems with one or more degrees of freedom; the concept of waves, focusing on light and sound; phase and group velocities, their physical meaning, and their measurement; diffraction and interference of light; polarization phenomena; and the formation of images in the eye and in optical instruments.

The textbook as a whole covers electromagnetism, mechanics, fluids and thermodynamics, and waves and light, and is designed to reflect the typical syllabus during the first two years of a calculus-based university physics program. Throughout all four volumes, particular attention is paid to in-depth clarification of conceptual aspects, and to this end the historical roots of the principal concepts are traced. Emphasis is also consistently placed on the experimental basis of the concepts, highlighting the experimental nature of physics. Whenever feasible at the elementary level, concepts relevant to more advanced courses in quantum mechanics and atomic, solid state, nuclear, and particle physics are included.

Alessandro Bettini is Emeritus Professor of Physics at the University of Padua, Italy, where he has taught experimental, general, and particle physics for 40 years. He is current Vice-President of the Italian Physical Society and his past posts also include Director of the INFN National Gran Sasso Laboratory, Vice-president of the OECD Global Science Forum, and Director of the Canfranc Underground Laboratory in Spain. Most recently, Professor Bettini’s scientific interests have focused on neutrino physics beyond the standard model and astroparticle phenomena. He is a member of the GERDA experiment, searching for neutrino-less double beta decay. Professor Bettini is the author of approximately 200 articles in international scientific journals as well as several books, including Introduction to Elementary Particle Physics (Cambridge University Press, 2008, 2nd edn).

“The fourth volume is dedicated to oscillatory phenomena, to waves, and in particular to light. … Alessandro Bettini has fulfilled the ambitious goal of writing a treatise that covers all of classical physics with a depth suitable for honor undergraduate courses. … Bettini’s books not only teach but inspire, and they will appeal to students and professors alike who feel that physics is truly rich of great ideas that deserve to be studied with devotion and love.” (Giuseppe La Rocca, Il Nuovo Saggiatore, April, 2017)

“Waves and Light occupies a particular niche in providing a complete overview of the basics, with a constant focus on the underlying physics that makes it ideal to lead into more advanced studies. … The book is highly beneficial to students as their main text in an elementary-calculus based course on classical optics, but would also be of great value to instructors looking for new insights into material they may have been teaching for many years.” (John Dudley, Optics & Photonics News, osa-opn.org, February, 2017)
Buy options