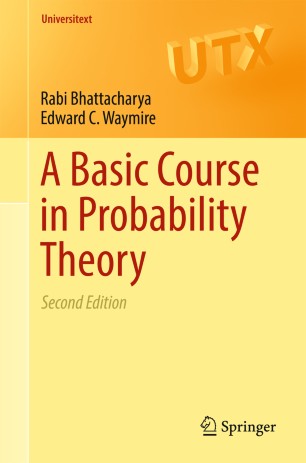 A Basic Course in Probability Theory

This text develops the necessary background in probability theory underlying diverse treatments of stochastic processes and their wide-ranging applications. In this second edition, the text has been reorganized for didactic purposes, new exercises have been added and basic theory has been expanded.  General Markov dependent sequences and their convergence to equilibrium is the subject of an entirely new chapter. The introduction of conditional expectation and conditional probability very early in the text maintains the pedagogic innovation of the first edition; conditional expectation is illustrated in detail in the context of an expanded treatment of martingales, the Markov property, and the strong Markov property. Weak convergence of probabilities on metric spaces and Brownian motion are two topics to highlight. A selection of large deviation and/or concentration inequalities ranging from those of  Chebyshev, Cramer–Chernoff, Bahadur–Rao, to Hoeffding have been added, with illustrative comparisons of their use in practice. This also includes a treatment of the Berry–Esseen error estimate in the central limit theorem.
The authors assume mathematical maturity at a graduate level; otherwise the book is suitable for students with varying levels of background in analysis and measure theory. For the reader who needs refreshers, theorems from analysis and measure theory used in the main text are provided in comprehensive appendices, along with their proofs, for ease of reference.
Rabi Bhattacharya is Professor of Mathematics at the University of Arizona. Edward Waymire is Professor of Mathematics at Oregon State University. Both authors have co-authored numerous books, including a series of four upcoming graduate textbooks in stochastic processes with applications.

Rabi Bhattacharya, PhD, has held regular faculty positions at UC Berkeley; Indiana University; and the University of Arizona. He is a Fellow of the Institute of Mathematical Statistics and a recipient of the U.S. Senior Scientist Humboldt Award and of a Guggenheim Fellowship. He has served on editorial boards of many international journals and has published several research monographs and graduate texts on probability and statistics.
Edward C. Waymire, PhD, is Professor of Mathematics at Oregon State University. He received a PhD in mathematics from the University of Arizona in the theory of interacting particle systems. His primary research concerns applications of probability and stochastic processes to problems of contemporary applied mathematics pertaining to various types of flows, dispersion, and random disorder.
Both authors have co-authored numerous books, including a series of four upcoming graduate textbooks in stochastic processes with applications.