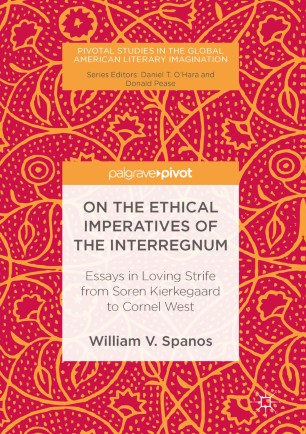 On the Ethical Imperatives of the Interregnum

Essays in Loving Strife from Soren Kierkegaard to Cornel West

This book is an autobiographical meditation on the way in which the world’s population has been transformed into a society of refugees and émigrés seeking –indeed, demanding– an alternative way of political belonging. Focusing on the interregnum we have precariously occupied since the end of World War II—and especially after 9/11— it constitutes a series of genealogical chapters that trace the author’s journey from his experience as a prisoner of war in Nazi Germany to the horrific fire-bombing of Dresden in February 1945. In doing so, it explores his search for an intellectual vocation adequate to the dislocating epiphany he experienced in bearing witness to these traumatising events.Having subsequently lost faith in the logic of belonging perpetuated by the nation-state, Spanos charts how he began to look in the rubble of that zero zone for an alternative way of belonging: one in which the old binary —whose imperative was based on the violence of the Friend/enemy opposition— was replaced by a paradoxical loving strife that enriched rather than negated the potential of each side. The chapters in this book trace this errant vocational itinerary, from the author’s early undergraduate engagement with Kierkegaard and Heidegger to Cornel West, moving from that disclosive occasion in the zero zone to this present moment.
William V. Spanos is Distinguished Professor Emeritus at Binghamton University (State University of New York), USA, and the founding editor of boundary 2:a journal of postmodern literature and culture which he edited from 1970-1987. He is the author of over hundred essays and many books on subject ranging from modernist and postmodernist literature, poststructuralist theory, and New Americanist studies.