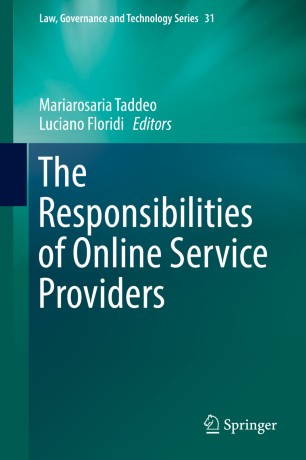 The Responsibilities of Online Service Providers

This volume focuses on the responsibilities of online service providers (OSPs) in contemporary societies. It examines the complexity and global dimensions of the rapidly evolving and serious challenges posed by the exponential development of Internet services and resources. It looks at the major actors – such as Facebook, Google, Twitter, and Yahoo! – and their significant influence on the informational environment and users’ interactions within it, as well as the responsibilities and liabilities such influence entails. It discusses the position of OSPs as information gatekeepers and how they have gone from offering connecting and information-sharing services to paying members to providing open, free infrastructure and applications that facilitate digital expression and the communication of information. The book seeks consensus on the principles that should shape OSPs’ responsibilities and practices, taking into account business ethics and policies. Finally, it discusses the rights of users and international regulations that are in place or currently lacking.

Mariarosaria Taddeo is Researcher at the Oxford Internet Institute, University of Oxford, Faculty Fellow at the Alan Turing Institute, and Junior Research Fellow at St Cross College, University of Oxford. Her area of expertise is Information and Computer Ethics, although she has worked on issues concerning Philosophy of Information, Epistemology, and Philosophy of AI. She published articles focusing on online trust, cyber security, and cyber warfare and guest-edited a number of special issues of peer-reviewed international journals. She also edited (with Luciano Floridi) a volume on ‘The Ethics of Information Warfare’ (Springer, 2014) and is currently writing a book on ‘The Ethics of Cyber Conflicts’ under contract for Routledge. Dr. Taddeo is the 2010 recipient of the Simon Award for Outstanding Research in Computing and Philosophy and of the 2013 World Technology Award for Ethics. She serves as editor-in-chief of Minds & Machines and in the executive editorial board of Philosophy & Technology.

Luciano Floridi is Professor of Philosophy and Ethics of Information at the University of Oxford and Director of Research of the Oxford Internet Institute. His most recent book is The Fourth Revolution - How the infosphere is reshaping human reality (2014 and 2016). He is a member of the EU's Ethics Advisory Group on Ethical Dimensions of Data Protection, of Google Advisory Board on “the right to be forgotten”, and Chairman of the Ethics Advisory Board of the European Medical Information Framework. Among his recognitions, he has been elected Fernand Braudel Senior Fellow by the European University Institute; awarded the Cátedras de Excelencia Prize by the University Carlos III of Madrid, was the UNESCO Chair in Information and Computer Ethics, and Gauss Professor of the Academy of Sciences in Göttingen. He is a recipient of the MEA’s J. Ong Award, the APA's Barwise Prize, the IACAP's Covey Award, and the INSEIT's Weizenbaum Award. He is a Fellow of the AISB, the BCS, and the Académie Internationale de Philosophie des Sciences.