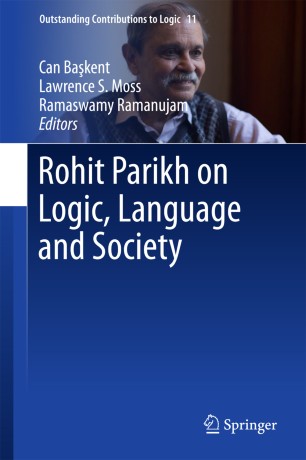 This book discusses major milestones in Rohit Jivanlal Parikh’s scholarly work. Highlighting the transition in Parikh’s interest from formal languages to natural languages, and how he approached Wittgenstein’s philosophy of language, it traces the academic trajectory of a brilliant scholar whose work opened up various new avenues in research.
This volume is part of Springer’s book series Outstanding Contributions to Logic, and honours Rohit Parikh and his works in many ways. Parikh is a leader in the realm of ideas, offering concepts and definitions that enrich the field and lead to new research directions. Parikh has contributed to a variety of areas in logic, computer science and game theory. In mathematical logic his contributions have been in recursive function theory, proof theory and non-standard analysis; in computer science, in the areas of modal, temporal and dynamic logics of programs and semantics of programs, as well as logics of knowledge; in artificial intelligence in the area of belief revision; and in game theory in the formal analysis of social procedures, with a strong undercurrent of philosophy running through all his work.
This is not a collection of articles limited to one theme, or even directly connected to specific works by Parikh, but instead all papers are inspired and influenced by Parikh in some way, adding structures to and enriching “Parikh-land”. The book presents a brochure-like overview of Parikh-land before providing an “introductory video” on the sights and sounds that you experience when reading the book.