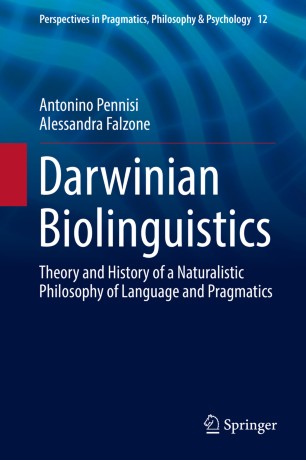 Theory and History of a Naturalistic Philosophy of Language and Pragmatics

This book proposes a radically evolutionary approach to biolinguistics that consists in considering human language as a form of species-specific intelligence entirely embodied in the corporeal structures of Homo sapiens. The book starts with a historical reconstruction of two opposing biolinguistic models: the Chomskian Biolinguistic Model (CBM) and the Darwinian Biolinguistic Model (DBM). The second part compares the two models and develops into a complete reconsideration of the traditional biolinguistic issues in an evolutionary perspective, highlighting their potential influence on the paradigm of biologically oriented cognitive science. The third part formulates the philosophical, evolutionary and experimental basis of an extended theory of linguistic performativity within a naturalistic perspective of pragmatics of verbal language.
The book proposes a model in which the continuity between human and non-human primates is linked to the gradual development of the articulatory and neurocerebral structures, and to a kind of prelinguistic pragmatics which characterizes the common nature of social learning. In contrast, grammatical, semantic and pragmatic skills that mark the learning of historical-natural languages are seen as a rapid acceleration of cultural evolution. The book makes clear that this acceleration will not necessarily favour the long-term adaptations for Homo sapiens.