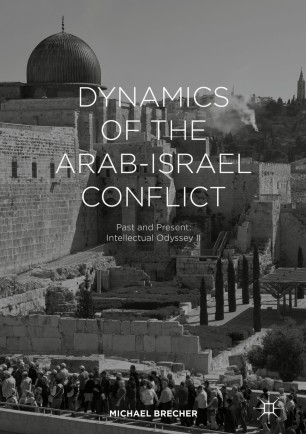 Dynamics of the Arab-Israel Conflict

Past and Present: Intellectual Odyssey II

This book is designed to illuminate one of the most enduring and complex international conflicts in the 20th and early 21st centuries. It begins with a discussion of historical roots, noting four reinforcing levels of conflict: incompatible belief systems, Islam and Judaism; competing national goals; inter-communal rivalry; and discordant pledges to the principal adversaries by Great Britain during World War I. An array of political and military acts from 1933 to 1947 culminated in the UN Partition Resolution (29 November 1947), Israel’s proclamation of Independence (14 May 1948), and the beginning of the first of nine Arab/Israel wars the next day. The book then analyzes the following dimensions of this unresolved conflict: the struggle for Jerusalem since 1947; perceptions of the conflict and the conditions of peace by leaders and officials; their acts of violence and of political hostility; the Arab/Israel military balance and their behavior during the two most significant wars (June 1967 and October 1973); the mostly-failed attempts at conflict resolution from 1937 to 2014; the causes of continuing deadlock, except for two cold peace agreements (Egypt-Israel, Israel-Jordan), and the author’s assessments of the way out of the seven-decade impasse. The book concludes with an analysis of Israel at 68, mostly its policies and behavior towards the Palestinians from 1967 to 2016.