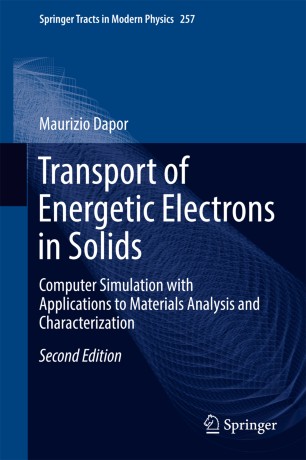 Transport of Energetic Electrons in Solids

Computer Simulation with Applications to Materials Analysis and Characterization

This new edition describes all the mechanisms of elastic and inelastic scattering of electrons with the atoms of the target as simple as possible. The use of techniques of quantum mechanics is described in detail for the investigation of interaction processes of electrons with matter. It presents the strategies of the Monte Carlo method, as well as numerous comparisons among the results of the simulations and the experimental data available in the literature.
New in this edition is the description of the Mermin theory, a comparison between Mermin theory and Drude theory, a discussion about the dispersion laws, and details about the calculation of the phase shifts that are used in the relativistic partial wave expansion method. The role of secondary electrons in proton cancer therapy is discussed in the chapter devoted to applications. In this context, Monte Carlo results about the radial distribution of the energy deposited in PMMA by secondary electrons generated by energetic proton beams are presented.