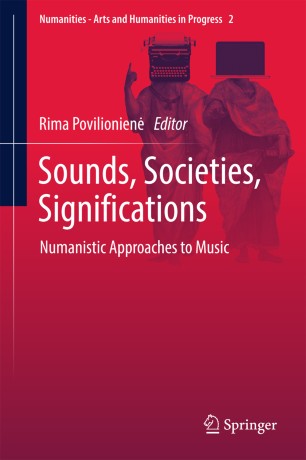 Part of the Numanities - Arts and Humanities in Progress book series (NAHP, volume 2)

This edited book covers many topics in musicological literature, gathering various approaches to music studies that encapsulate the vivid relation music has to society. It focusses on repertoires and geographical areas that have not previously been well frequented in musicology. As readers will see, music has many roles to play in society. Music can be a generator of social phenomena, or a result of them; it can enhance or activate social actions, or simply co-habit with them. Above all, music has a stable position within society, in that it actively participates in it. Music can either describe or prescribe social aspects; musicians may have a certain position/role in society (e.g., the “popstar” as fashion leader, spokesman for political issues, etc.). Depending on the type of society, music may have a certain “meaning” or “function” (music does not mean the same thing everywhere in the world). Lastly, music can define a society, and it is not uncommon for it to best define a particular historical moment.

Case-studies in this work provide visibility for musical cultures that are rarely exposed in the dominant musicological discourse. Several contributions combine musicological analysis with "insider-musician" points of view. Some essays in the collection address the cultural clash between certain types of music/musicians and the respective institutional counterparts, while certain contributing authors draw on experimental research findings.

Throughout this book we see how musics are socially significant, and - at the same time - that societies are musically significant too. Thus the book will appeal to musicologists, cultural scholars and semioticians, amongst others.

Rima Povilionienė (b. 1975), musicologist, PhD in humanities (2007). In 2004, she was on internship at the Institute of Musicology at Leipzig University; in 2012, on a scientific internship at IRCAM, Paris. Povilionienė holds senior researcher position at the International Semiotics Institute (ISI) of Kaunas University of Technology; she is an associate professor at the Department of Musicology of the Lithuanian Academy of Music and Theatre (LAMT), assistant editor-in-chief of the scientific yearly Lithuanian Musicology and an editor at the Lithuanian National Philharmonic; in 2008–2015, she was a senior researcher at the Centre of Science of the LAMT. Povilionienė has published a monograph, a scientific study and up to 20 scientific articles. Her scientific research was presented at the conferences in Lithuania, Poland, UK, Singapore, France, and Italy. She has compiled over 10 publications and published more than 150 critic reviews. In 2008, Povilionienė was awarded the Lithuanian Academy of Sciences citation for doctoral thesis, and the Lithuanian Ministry of Education 1st prize for the study book Music Language: Baroque. Her monograph Musica Mathematica (2013) was awarded Vytautas Landsbergis prize for the best musicological work 2013.