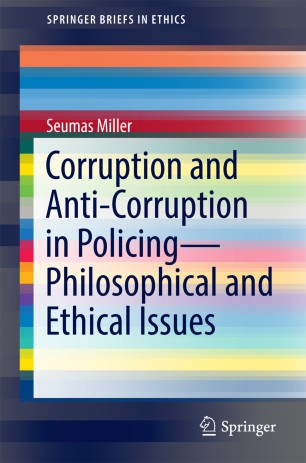 Corruption and Anti-Corruption in Policing—Philosophical and Ethical Issues

Part of the SpringerBriefs in Ethics book series (BRIEFSETHIC)

High levels of police corruption have been a persistent historical tendency in police services throughout the world. While the general area of concern in this book is with police corruption and anti-corruption, the focus is on certain key philosophical and ethical issues that arise for police organisations confronting corruption. On the normative account proffered in this book the principal institutional purpose of policing is the protection of legally enshrined moral rights and the principal institutional anti-corruption arrangement is what is referred to as an integrity system. The latter includes oversight bodies with investigative powers and internal affairs departments  as well as specific devices such as early warning indicators, professional reporting mechanisms and integrity tests. Key concepts analysed in the book include corruption, noble cause corruption and collective moral responsibility. The key ethical issues analysed include investigative independence, professional reporting, covert operations and integrity tests.

Seumas Miller is a professorial research fellow at the Centre for Applied Philosophy and Public Ethics, Charles Sturt University (Canberra) and the 3TU Centre for Ethics and Technology at Delft University of Technology (The Hague). Miller is the author or co-author of fifteen books and approximately 200 refereed articles, book chapters and other academic papers. He has been awarded over 40 competitive research grants (total value in excess of AU$20 million) including, the Australian Research Council Special Research Centre Grant for the Centre for Applied Philosophy and Public Ethics and, most recently, a European Research Council Advanced Grant on Global Terrorism and Collective Responsibility. His authored books include, Social Action (Cambridge University Press, 2001), Ethical Issues in Policing (with J. Blackler) (Ashgate, 2005), Ethical and Philosophical Aspects of the Dual Use Dilemma in the Biological Sciences (with M Selgelid) (Springer, 2008),Terrorism and Counter-terrorism: Ethics and Liberal Democracy (Blackwell Publishing, 2008), Integrity Systems for Occupations (with A Alexandra) (Ashgate, 2010), Moral Foundations of Social Institutions (Cambridge University Press, 2010), Shooting to Kill: The Ethics of Police and Military Use of Lethal Force (Oxford University Press, 2016) and Institutional Corruption (Cambridge University Press, forthcoming).