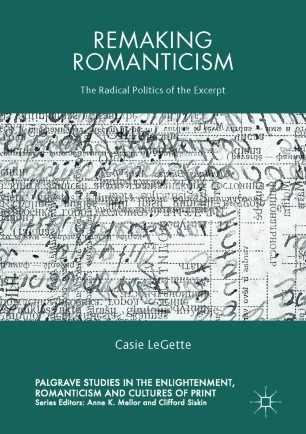 The Radical Politics of the Excerpt

This book shows that the publishers and editors of the radical press deployed Romantic-era texts for their own political ends—and for their largely working-class readership—long after those works’ original publication. It examines how the literature of the British Romantic period was excerpted and reprinted in radical political papers in Britain in the nineteenth century. The agents of this story were bound by neither the chronological march of literary history, nor by the original form of the literary texts they reprinted. Godwin’s Caleb Williams and poems by Wordsworth, Southey, Coleridge, and Shelley appear throughout this book as they appeared in the nineteenth century, in bits and pieces. Radical publishers and editors carefully and purposefully excerpted the works of their recent past, excavating useful political claims from the midst of less amenable texts, and remaking texts and authors alike in the process.