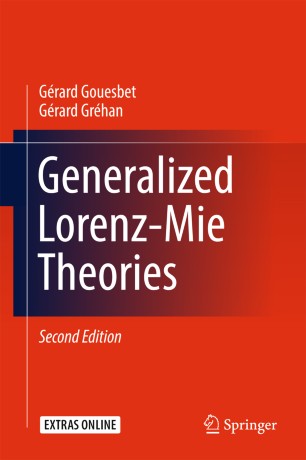 This book explores generalized Lorenz–Mie theories when the illuminating beam is an electromagnetic arbitrary shaped beam relying on the method of separation of variables.

The new edition includes an additional chapter covering the latest advances in both research and applications, which are highly relevant for readers.

Although it particularly focuses on the homogeneous sphere, the book also considers other regular particles. It discusses in detail the methods available for evaluating beam shape coefficients describing the illuminating beam. In addition it features applications used in many fields such as optical particle sizing and, more generally, optical particle characterization, morphology-dependent resonances and the mechanical effects of light for optical trapping, optical tweezers and optical stretchers. Furthermore, it provides various computer programs relevant to the content.

Gérard Gouesbet is currently emeritus professor at INSA where he pursues research in electromagnetism, as well fulfilling philosophy and theology commitments.

Until 2007, he was active as a researcher at the CNRS in France, an associate professor in Rouen University, and a professor at the INSCIR and then at the INSA of Rouen, France. As a teacher he held courses in theoretical physics (special and general relativity, quantum mechanics) as well as fluid mechanics, thermodynamics, turbulence theory, theory of dynamical systems, and chaos theory.

Prof. Gouesbet is the founder of LESP (Laboratory of Electromagnetics and Systems with Particles), an INSA laboratory and part of the CNRS laboratory Coria, which he headed for more than 20 years.

Gérard Gréhan is currently research director and professor at LESP (Laboratory of Electromagnetics and Systems with Particles), an INSA laboratory and part of the CNRS Laboratory Coria