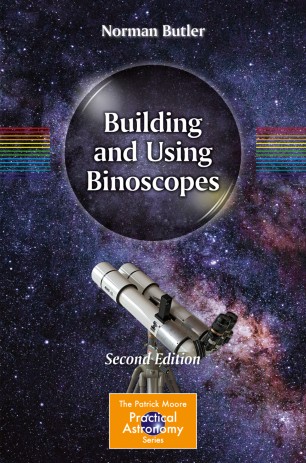 Covering both homemade and commercial products, this book provides the reader with simple and straightforward information about the modeling, building, and use of binoscopes. Binoscopes can be thought of as binoculars enlarged to the size of telescopes - essentially, a combination of the two.

Constructing a binoscope is easier than most people think, but it still demands attention to detail and proper background knowledge. The author goes on to provide additional information about the products currently on the market, should the reader choose to purchase one instead of building it. Lastly, the book also compares binoscopes with telescopes in great detail, outlining the differences the reader can expect to see in the night sky from using both. The celestial views obtained with a binoscope, compared to a single telescope of the same aperture, are a very different experience.

The new edition emphasizes the obvious advantages of viewing celestial objects through a binoscope. There are also many new photos and additional information on the latest equipment and some very special and rare equipment a collector might be interested in. Newly added cartoons and additional images of beautiful deep sky objects in each of the chapters makes reading the book a more enjoyable experience. Finally, there is a new comet discovery form and guide to follow for such discoveries, and a complete list of Messier objects for those interested in searching for these.

Norman P. Butler is an award winning telescope creator and published writer of telescope-building articles, some of which have appeared in popular astronomy magazines and books. A graduate of San Diego City College, Norman holds a Master’s degree in physics and astronomy. After serving in the US Navy for many years as an Opticalman, he worked for AVCO Everett Research Laboratory at Haleakala Observatory, Maui, building electro-optical equipment for use on a 1.6M and dual 1.2M telescopes. While there, he also performed core measurement studies on the super-massive galaxy M-87, as well as additional galactic studies and stellar scintillation measurements. Butler later went on to teach at the university level in Shenzhen, China, before retiring in 2011 to the island of Saipan in the Northern Marianas. Butler has received the Engineering Merit Award and Warren Estes Memorial Award, both for homemade binoscopes that he designed and built.