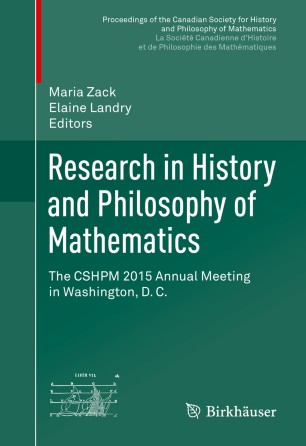 Research in History and Philosophy of Mathematics

This volume contains seventeen papers that were presented at the 2015 Annual Meeting of the Canadian Society for History and Philosophy of Mathematics/La Société Canadienne d’Histoire et de Philosophie des Mathématiques, held in Washington, D.C. In addition to showcasing rigorously reviewed modern scholarship on an interesting variety of general topics in the history and philosophy of mathematics, this meeting also honored the memories of Jacqueline (Jackie) Stedall and Ivor Grattan-Guinness; celebrated the Centennial of the Mathematical Association of America; and considered the importance of mathematical communities in a special session. These themes and many others are explored in these collected papers, which cover subjects such as

Written by leading scholars in the field, these papers will be accessible to not only mathematicians and students of the history and philosophy of mathematics, but also anyone with a general interest in mathematics.