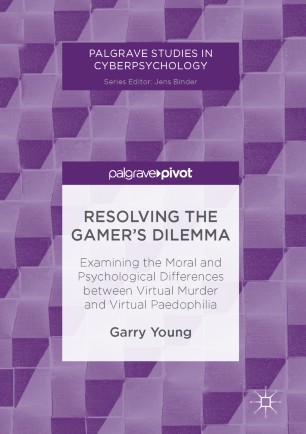 Part of the Palgrave Studies in Cyberpsychology book series (PASCY)

This book explores the gamer’s dilemma, which lies at the heart of theorising about the morality of certain video game content. The dilemma is as follows: given that gaming content involves virtual characters within a virtual environment, the moral permission of virtual murder would also appear to morally permit virtual paedophilia. Yet most gamers and members of wider society would not want to play, endorse, or find in any way morally acceptable the enactment of virtual paedophilia within a video game. Yet by accepting the moral permissibility of virtual murder they leave themselves vulnerable to having to accept the moral permissibility of virtual paedophilia.
This book provides an incredibly thorough and systematic analysis and evaluation of the gamer’s dilemma, by considering the origins of the intuitions around the dilemma, and exploring whether they find support from traditional or contemporary moral theory and psychological research. The book will be great interest to academics and students of philosophy and psychology, as well as members of the wider public interested in video game violence and taboo enactments more generally.

Garry Young is Senior Lecturer in Psychology at Nottingham Trent University, UK. His research and teaching focus is the ethics of enacting real-life taboos within virtual environments such as video games, the phenomenology of delusions and embodied cognition. He has published widely on topics including ethics in video games, notions of self in cyberspace, the Capgras and Cotard delusions, and differences between procedural and declarative knowledge.

“Young brings together the dilemma and the three best known responses to it and analyzes them all, to provide the reader with a new perspective on this issue as well as contributing his own novel attempt at resolving the dilemma. … useful to academics, gamers, and to anyone interested in the philosophy of video games. … recommend this book to anyone specifically interested in the Gamer’s Dilemma or as an interesting introduction to the philosophy of video games … .” (Ryan Dennison, Ethics and Information Technology, Vol. 19, 2017)
Buy options