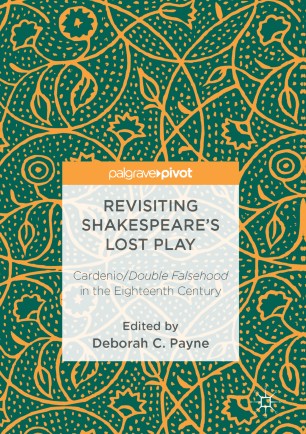 Cardenio/Double Falsehood in the Eighteenth Century

'This uniformly excellent collection does what none of the other recent scholarship on Double Falsehood or Cardenio does: it approaches the complex problems of authorship, performance, form and gender politics from the perspective of Restoration and eighteenth-century theatre. Anyone seriously interested in the Jacobean play, its Georgian adaptation, or in English drama from 1660 to 1740 should read this book.' - Gary Taylor, General Editor, The New Oxford Shakespeare
This collection of essays centres on Double Falsehood, Lewis Theobald’s 1727 adaptation of the “lost” play of Cardenio, possibly co-authored by John Fletcher and William Shakespeare. In a departure from most scholarship to date, the contributors fold Double Falsehood back into the milieu for which it was created rather than searching for traces of Shakespeare in the text. Robert D. Hume’s knowledge of theatre history permits a fresh take on the forgery question as well as the Shakespeare authorship controversy. Diana Solomon’s understanding of eighteenth-century rape culture and Jean I. Marsden’s command of contemporary adaptation practices both emphasise the play’s immediate social and theatrical contexts. And, finally, Deborah C. Payne’s familiarity with the eighteenth-century stage allows for a reconsideration of Double Falsehood as integral to a debate between Theobald, Alexander Pope, and John Gay over the future of the English drama.
Deborah C. Payne is an Associate Professor of Literature at American University. She specializes in seventeenth- and eighteenth-century drama, theatre history, and performance theory. Her publications include Cultural Readings of Restoration and Eighteenth-Century English Theatre, co-edited with J. Douglas Canfield; The Cambridge Companion to English Restoration Theatre; and Four Restoration Libertine Plays. Recently she completed The Commodiluxe Stage: A New History of Restoration Theatre, 1660-1700.