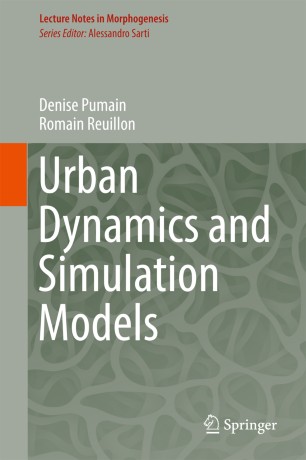 This monograph presents urban simulation methods that help in better understanding urban dynamics. Over historical times, cities have progressively absorbed a larger part of human population and will concentrate three quarters of humankind before the end of the century. This “urban transition” that has totally transformed the way we inhabit the planet is globally understood in its socio-economic rationales but is less frequently questioned as a spatio-temporal process.  However, the cities, because they are intrinsically linked in a game of competition for resources and development, self organize in “systems of cities” where their future becomes more and more interdependent. The high frequency and intensity of interactions between cities explain that urban systems all over the world exhibit large similarities in their hierarchical and functional structure and rather regular dynamics.  They are complex systems whose emergence, structure and further evolution are widely governed by the multiple kinds of interaction that link the various actors and institutions investing in cities their efforts, capital, knowledge and intelligence. Simulation models that reconstruct this dynamics may help in better understanding it and exploring future plausible evolutions of urban systems. This would provide better insight about how societies can manage the ecological transition at local, regional and global scales. The author has developed a series of instruments that greatly improve the techniques of validation for such models of social sciences that can be submitted to many applications in a variety of geographical situations. Examples are given for several BRICS countries, Europe and United States. The target audience primarily comprises research experts in the field of urban dynamics, but the book may also be beneficial for graduate students.