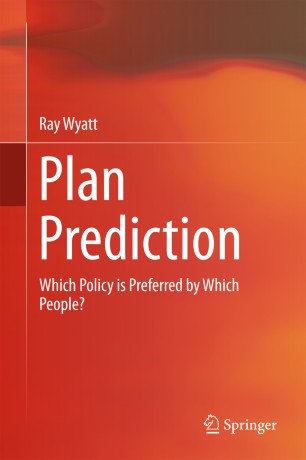 This book develops an innovative system, in the form of an "app", that harnesses the power of the internet to predict which sorts of people will prefer which policy in ANY planning situation.

It chronicles the accumulated research wisdom behind the system’s reasoning, along with several less successful approaches to policy making that have been found wanting in the past – including the myth, usually peddled by strategic planners, that it is possible to find a "best" plan which optimally satisfies everybody.

The book lays out an entirely new kind of Planning Support System (PSS). It will facilitate decision-making that is far more community-sensitive than previously, and it will drastically improve the performance of anyone who needs to plan within socially-sensitive contexts – which is all of us.

A standout feature of the system is its commitment to “scientific rigour”, as shown by its predicted plan scores always being graphically presented within error margins so that true statistical significance is instantly observable. Moreover, the probabilities that its predictions are correct are always shown  – a refreshing change from most, if not all other Decision Support Systems (DSS) that simply expect users to accept their outputs on faith alone.