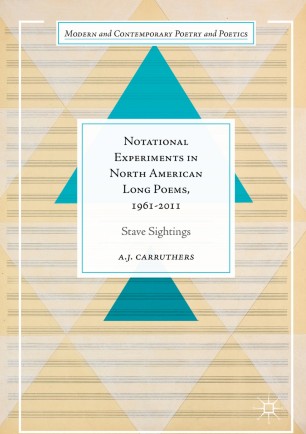 This book is a critical experiment that tracks the literary and poetic uses of musical notation and notational methods in North American long poems from the middle of last century to the contemporary moment. Poets have readily referred to their poems as “scores.” Yet, in this study, Carruthers argues that the integration of musical scores in expansive works of this period does more work than previously thought, offering both resolution and escape from the demands placed on long poem form. The five case studies, on Langston Hughes, Armand Schwerner, BpNichol, Joan Retallack and Anne Waldman, offer approaches to reading literary scores in what might be described as a critical stave or a critical “fugue” of instances. In differing ways, musical notation and notational methods impact the form, time and sometimes the ethical and political stances of these respective long poems.

A.J. Carruthers is an Australian-born experimental poet and critic. He is author of AXIS Book 1: Areal, the first volume in a lifelong long poem. He teaches literature and creative writing in Shanghai, and holds editorial posts at Southerly, Rabbit Poetry Review and SOd press.