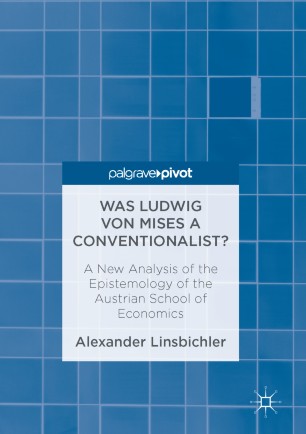 Was Ludwig von Mises a Conventionalist?

Linsbichler’s erudite new book is not only an invitation for Austrian economists to reconsider their Misesian methodological foundations, but more importantly an attempt to bridge the methodological gap between the Austrian School and mainstream economics. His charitable reading of Mises provides the basis for an original conventionalist interpretation of Mises’ methodology, but it is most of all his anti-dogmatism, methodological openness and call for intellectual humility that stand out.

This book proposes new solutions to interpretational problems of Mises‘ methodological position. It also o­ffers a lucid and scholarly introduction to some important problems of the logic of science. Specialists and general readers alike will profit much from reading that book.

—Karl Milford, Associate Professor in History of Economic Thought and Philosophy of Economics (University of Vienna)

This innovative book challenges the mainstream reading of Ludwig von Mises as a contested “a priori” proponent of the Austrian School of economics. It o­ffers new insights to Mises’ methodology and epistemology by interpreting his praxeology as conventionalist. In doing so the author opens novel perspectives for contextualizing Ludwig von Mises’ work in the history of the Austrian School and the long term “Methodenstreit” since the 19th century.

—Friedrich Stadler, Professor for History and Philosophy of Science (University of Vienna), Head and Director of the Institute Vienna Circle, President of the Austrian Ludwig Wittgenstein Society

This book presents a concise introduction to the epistemology and methodology of the Austrian School of economics as defended by Ludwig von Mises. The author provides an innovative interpretation of Mises’ arguments in favour of the a priori truth of praxeology, the received view of which contributed to the academic marginalization of the Austrian School. The study puts forward a unique argument that Mises – perhaps unintentionally – defends a form of conventionalism. Chapters in the book include detailed discussions of individualism, historicism, epistemological positions, and essentialism. The author goes on to discuss Mises’ justifi cation of the fundamental axiom and proposes a conventionalist interpretation. By presenting praxeology as a conventionalist research programme, the author aims at reinvigorating the interaction between the Austrian School, mainstream economics, and the philosophy of science. This comprehensive reconstruction is suitable for economists interested in the history and philosophy of their discipline, as well as for philosophers of science.

Alexander Linsbichler is a Fellow and Lecturer at the University of Vienna, Austria, where he previously studied mathematics, mathematical logic and foundations, and philosophy of science. His main areas of expertise are the history and philosophy of science, mathematical philosophy, and the Austrian School of economics. His current research project is dedicated to the multi-faceted relation between the Austrian School and logical empiricism.

“In this book, Linsbichler provides a deliberate analysis of a number of Mises’ unsophisticated texts through a method Linsbichler calls rational reconstruction. Through this approach, Linsbichler appears to succeed in shedding new light on Mises’ epistemology.” (Natsuka Tokumaru, History of Economic Ideas, Vol. 26 (2), 2018)