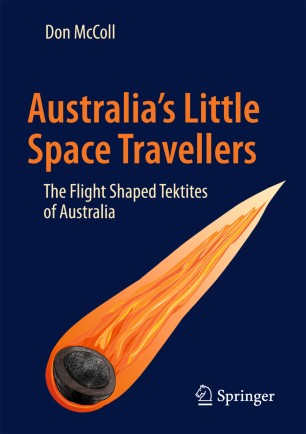 The Flight Shaped Tektites of Australia

This book provides a showcase for the incredibly well-preserved flight-textured tektites of southern Australia, which are the world’s finest known examples. It provides an overview of their forms and flight features, which can be expected to appear, at least in part, on any objects falling from space. Some of these specimens are so perfectly shaped that it is hard to believe that they have been buried in the recent strata of Australia for 770,000 years. It also discusses the history of the story of their incredible flight into space and return becoming widely accepted, which led to them being recognized as space travelers. Further, it describes their classical shapes and offers an explanation of how each developed. It provides collectors, meteoriticists, and museum curators with insights into the astounding forms of Australian tektites produced by hypersonic flight.

Don McColl has been involved with Australian meteorites and tektites for over fifty years. His early graduate years were in the early sixties, when he was studying at Melbourne University, and spent time in the company of George Baker whose work on the tektites of Australia was monumental.  It is difficult to believe now how much controversy there was at that time, about the nature and origin of the superbly shaped Australian tektites.  George Baker never had any doubts, but then he did have the advantage of having the finest shaped tektites in the world virtually at his doorstep.  During the author’s working life, which included curating for three different national museums, he continued to take a special interest in these remarkable specimens.  In recent retirement years, he and his wife Lois have amused themselves finding a large number of stony and iron meteorites, plus great numbers of the flight textured tektites, in all kinds of country, along the tracts of inland Australia where the tektites fell in such abundance so long ago.  In 2011 together with Svend Buhl of Hamburg, he produced the recent book, “Henbury Craters and Meteorites, their Discovery, History and Study”, and it seemed logical to follow this with something about the tektites.