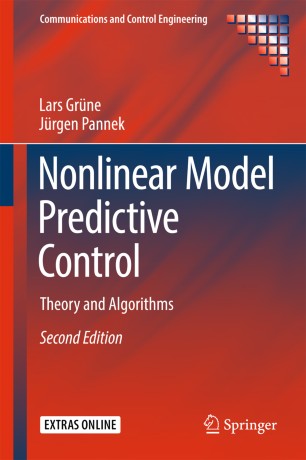 This book offers readers a thorough and rigorous introduction to nonlinear model predictive control (NMPC) for discrete-time and sampled-data systems. NMPC schemes with and without stabilizing terminal constraints are detailed, and intuitive examples illustrate the performance of different NMPC variants. NMPC is interpreted as an approximation of infinite-horizon optimal control so that important properties like closed-loop stability, inverse optimality and suboptimality can be derived in a uniform manner. These results are complemented by discussions of feasibility and robustness.
An introduction to nonlinear optimal control algorithms yields essential insights into how the nonlinear optimization routine—the core of any nonlinear model predictive controller—works. Accompanying software in MATLAB® and C++ (downloadable from extras.springer.com/), together with an explanatory appendix in the book itself, enables readers to perform computer experiments exploring the possibilities and limitations of NMPC.
This book (second edition) has been substantially rewritten, edited and updated to reflect the significant advances that have been made since the publication of its predecessor, including:
• a new chapter on economic NMPC relaxing the assumption that the running cost penalizes the distance to a pre-defined equilibrium;
• a new chapter on distributed NMPC discussing methods which facilitate the control of large-scale systems by splitting up the optimization into smaller subproblems;
• an extended discussion of stability and performance using approximate updates rather than full optimization;
• replacement of the pivotal sufficient condition for stability without stabilizing terminal conditions with a weaker alternative and inclusion of an alternative and much simpler proof in the analysis; and
• further variations and extensions in response to suggestions from readers of the first edition.
Though primarily aimed at academic researchers and practitioners working in control and optimization, the text is self-contained, featuring background material on infinite-horizon optimal control and Lyapunov stability theory that also makes it accessible for graduate students in control engineering and applied mathematics.

Lars Grüne has been Professor for Applied Mathematics at the University of Bayreuth, Germany, since 2002 and head of the Chair of Applied Mathematics since 2009. He received his Diploma and Ph.D. in Mathematics in 1994 and 1996, respectively, from the University of Augsburg and his habilitation from the J.W. Goethe University in Frankfurt/M in 2001. He held visiting positions at the Universities of Rome ‘La Sapienza’ (Italy), Padova (Italy), Melbourne (Australia), Paris IX — Dauphine (France) and Newcastle (Australia). Professor Grüne is Editor-in-Chief of the journal Mathematics of Control, Signals and Systems (MCSS), Associate Editor for the Journal of Optimization Theory and Applications (JOTA) and the Journal of Applied Mathematica and Mechanics (ZAMM) and member of the Managing Board of the GAMM — International Association of Applied Mathematics and Mechanics. Professor Grüne co-authored four books, more than 100 papers and chapters in peer reviewed journals and books and more than 80 articles in conference proceedings. He is member of the steering committee of the International Symposium on Mathematical Theory of Networks and Systems (MTNS) and member of the Program Comittees of various other conferences, including IFAC-NOLCOS symposia, the European Control Conference and the IEEE Conference on Decision and Control. In 2012, Professor Grüne was awarded the Excellence in Teaching Award (“Preis für gute Lehre”) from the State of Bavaria. His research interests lie in the area of mathematical systems and control theory with a focus on numerical and optimization-based methods for stability analysis and stabilization of nonlinear systems. Jürgen Pannek has been Professor in the Department of Production Engineering at the University of Bremen (Germany) since 2014. He received his Diploma in Mathematical Economics and his Ph.D. in Mathematics from the University of Bayreuth in 2005 and 2009. He was visiting lecturer at the University of Birmingham (England) in 2008 and Curtin University of Perth (Australia) from 2010 to 2011. Thereafter, he worked as scientific assistant in the Department of Aerospace Engineering at the University of the Federal Armed Forces Munich (Germany). In his research, he focuses on the area of system and control theory from the application point of view regarding robotics, logistics and cyberphysical systems.

“The book is self-contained and its excellent presentation can be highly recommended for students but also researchers new to the topic of model predictive control.” (Tobias Breiten, zbMATH 1429.93003, 2020)

“The book provides an excellent and extensive treatment of NMPC from a careful introduction to the underlying theory to advanced results. It can be used for independent reading by applied mathematicians, control theoreticians and engineers who desire a rigorous introduction into the NMPC theory. It can also be used as a textbook for a graduate-level university course in NMPC.” (Ilya Kolmanovsky, Mathematical Reviews, April, 2015)

“In the monograph nonlinear, discrete-time, finite-dimensional control systems with constant parameters are considered. … Each chapter of the monograph contains many numerical examples which illustrate the theoretical considerations, several possible extensions and open problems. Moreover, relationships to results on predictive control published in the literature are pointed out.” (Jerzy Klamka, Zentralblatt MATH, Vol. 1220, 2011)
Buy options