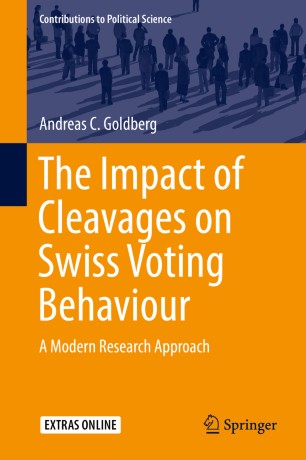 The Impact of Cleavages on Swiss Voting Behaviour

This book studies the impact of cleavages on electoral choices. Based on a case study of Switzerland, it analyses how cleavages divide voters into voting blocs and how this influences Swiss voting behaviour and the Swiss party system. The first part examines the development of salient cleavages such as religion, social class, rural-urban, and language between 1971 and 2011. Behavioural changes among voters and changes in the size of social groups are explored as explanatory factors for the decline of cleavage voting. The second part proposes a contextual perspective analysis of the current impact of cleavages using both individual and contextual factors. These factors are also combined to examine interaction effects between the individual and the context. Finally, the third part analyses whether the impact of cleavages has harmonised across different contexts (Swiss cantons) over time.

Andreas Goldberg is a post-doctoral researcher at the Amsterdam School of Communication Research (ASCoR), University of Amsterdam. Prior to that, he has worked as researcher at the University of Geneva, where he has received his PhD in political science in 2015. During his PhD he has also worked for the Swiss Electoral Studies Project at FORS, the Swiss Centre of Expertise in the Social Sciences in Lausanne. His research interests include voting behaviour, participation and survey methods.