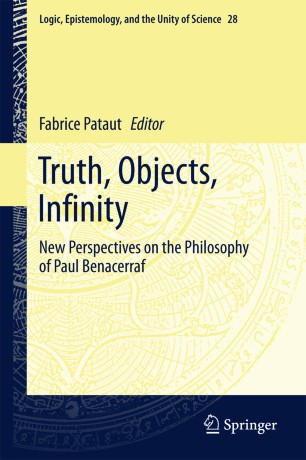 New Perspectives on the Philosophy of Paul Benacerraf

Part of the Logic, Epistemology, and the Unity of Science book series (LEUS, volume 28)

This volume features essays about and by Paul Benacerraf, whose ideas have circulated in the philosophical community since the early nineteen sixties, shaping key areas in the philosophy of mathematics, the philosophy of language, the philosophy of logic, and epistemology. The book started as a workshop held in Paris at the Collège de France in May 2012 with the participation of Paul Benacerraf. The introduction addresses the methodological point of the legitimate use of so-called “Princess Margaret Premises” in drawing philosophical conclusions from Gödel’s first incompleteness theorem. The book is then divided into three sections. The first is devoted to an assessment of the improved version of the original dilemma of “Mathematical Truth” due to Hartry Field: the challenge to the platonist is now to explain the reliability of our mathematical beliefs given the very subject matter of mathematics, either pure or applied. The second addresses the issue of the ontological status of numbers: Frege’s logicism, fictionalism, structuralism, and Bourbaki’s theory of structures are called up for an appraisal of Benacerraf’s negative conclusions of “What Numbers Could Not Be.” The third is devoted to supertasks and bears witness to the unique standing of Benacerraf’s first publication: “Tasks, Super-Tasks, and Modern Eleatics” in debates on Zeno’s paradox and associated paradoxes, infinitary mathematics, and constructivism and finitism in the philosophy of mathematics.
Two yet unpublished essays by Benacerraf have been included in the volume: an early version of “Mathematical Truth” from 1968 and an essay on “What Numbers Could Not Be” from the mid 1970’s. A complete chronological bibliography of Benacerraf’s work to 2016 is provided.
Essays by Jody Azzouni, Paul Benacerraf, Justin Clarke-Doane, Sébastien Gandon, Brice Halimi, Jon Pérez Laraudogoitia, Mary Leng, Antonio León-Sánchez and Ana C. León-Mejía, Marco Panza, Fabrice Pataut, Philippe de Rouilhan, Andrea Sereni, and Stewart Shapiro.