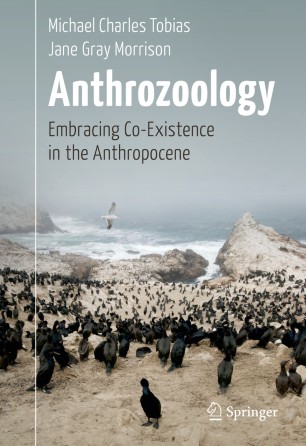 Embracing Co-Existence in the Anthropocene

This groundbreaking work of both theoretical and experiential thought by two leading ecological philosophers and animal liberation scientists ventures into a new frontier of applied ethical anthrozoological studies. Through lean and elegant text, readers will learn that human interconnections with other species and ecosystems are severely endangered precisely because we lack - by our evolutionary self-confidence - the very coherence that is everywhere around us abundantly demonstrated. What our species has deemed to be superior is, according to Tobias and Morrison, the cumulative result of a tragically tenuous argument predicated on the brink of our species’ self-destruction, giving rise to a most unique proposition: We either recognize the miracle of other sentient intelligence, sophistication, and genius, or risk enshrining the shortest lived epitaph of any known vertebrate in earth’s 4.1 billion years of life.

Tobias and Morrison draw on 45 years of research in fields ranging from ecological anthropology, animal protection and comparative ethics to literature and spirituality - and beyond. They deploy research in animal and plant behavior, biocultural heritage contexts from every continent and they bring to bear a deeply metaphysical array of perspectives that set this book apart from any other. The book departs from most work in such fields as animal rights, ecological aesthetics, comparative ethology or traditional animal and plant behaviorist work, and yet it speaks to readers with an interest in those fields.

A deeply provocative book of philosophical premises and hypotheses from two of the world’s most influential ecological philosophers, this text is likely to stir uneasiness and debate for many decades to come.

Michael Tobias and Jane Gray Morrison, partners who between them have authored some 50 books and written, directed and produced some 170 films, a prolific body of work that has been read, translated and/or broadcast around the world, have been married for more than a quarter-of-a-century. Their field research across the disciplines of comparative literature, anthropology, the history of science and philosophy, ecology and ethics, in over 80 countries, has served as a telling example of what two people – deeply in love with one another – can accomplish in spreading that same unconditional love to others – of all species.

“Anthrozoology: Embracing Co-Existence in the Anthropocene is packed with example after example of attitudes, values, behaviors, and practices of human dominance toward animals across and throughout cultural history. … Anthrozoology is a challenging yet informative and very creative book; one that I imagine would engage and stimulate students, among others, in countless, unimaginable ways.” (David J. Wagner, MAHB, mahb.stanford.edu, February, 2017)
Buy options