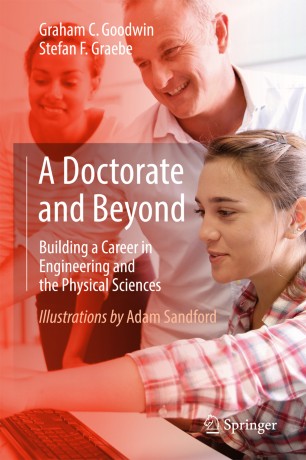 A Doctorate and Beyond

Building a Career in Engineering and the Physical Sciences

A book that takes you through and beyond your doctoral studies. It will be a valuable reference throughout your working life.

Drawing on their own extensive experience, the authors pass on invaluable advice by answering such questions as:

Do I want to do a doctorate?

How should I choose which doctorate and where to study?

How do I achieve my doctorate?

What career opportunities exist once I’ve completed my doctorate?

What is the role of networking, leadership and reputation in building my career?

How do I go about mentoring the next generation?

What do I do when things don’t go to plan?

This practical guide helps you to determine your best answer to all these questions and more. The authors not only discuss how to become a success but also how to keep success going, beginning with the choice to do a doctorate (or not) and what to expect, through how to get the best from student–supervisor interaction, the value of networking, the process of publication, how to choose between a career in academia or industry, while achieving work–life balance.

The authors’ own thoughts are enriched by the life experiences of many colleagues and prominent individuals who have achieved success and recognition: the book contains inspirational quotes from established figures in academia and industry. They reflect on career options, what leads to a successful career, and how to make conscious career choices instead of letting things happen and hoping for the best. This ranges from avoiding common pitfalls—such as squandering your reputation—to developing that all-important energy: your personal passion.

A Doctorate and Beyond will be an extra difference in making the most of the best times and will support you when the going gets tough. If you are contemplating doctoral studies in engineering or the physical sciences, or have a doctorate and are seeking career guidance, this book will change the way you think about life.

Graham Goodwin received B.Sc., B.E. and Ph.D. from the University of New South Wales. In 2010 he was awarded the IEEE Control Systems Field Award and in 2013 he received the Rufus T. Oldenburger Medal from the American Society of Mechanical Engineers. He was twice awarded the International Federation of Automatic Control Best Engineering Text Book. He is a Fellow of IEEE; an Honorary Fellow of Institute of Engineers, Australia; a Fellow of the International Federation of Automatic Control, a Fellow of the Australian Academy of Science; a Fellow of the Australian Academy of Technology, Science and Engineering; a Member of the International Statistical Institute; a Fellow of the Royal Society, London and a Foreign Member of the Royal Swedish Academy of Sciences. He holds Honorary Doctorates from Lund Institute of Technology, Sweden and the Technion Israel. He is the co-author of nine books, four edited books, and several hundred papers. Graham is a Distinguished Professor at Harbin Institute of Technology (China), Northwestern University (China), Zhengzhou University (China) and Universidad Técnica Federico Santa María (Chile). He holds 16 International Patents covering rolling mill technology, telecommunications, mine planning and mineral exploration.

Stefan Graebe was awarded a doctorate in Control Engineering from the Royal Institute of Technology in Stockholm, Sweden. During his 10 years as an academic, his areas of expertise included grey box identification, control system design as well as industrial applications of advanced control and their economic impact. Stefan they spent 12 years as a manager and executive in the oil industry. His positions included being Chief Strategist, CEO and Board member of various companies and joint ventures turning over hundreds of millions of EUR. In 2009 Stefan trained as a coach and has since then built his coaching practice for businesses and individuals. He is based in Cape Town and works globally.

Adam Sandford grew up watching cartoons and reading Garfield comic books. He became fascinated by Andy Warhol and Pop Art whilst in high school and became an avid DC Comics fan. He studied Graphic Design at Newcastle University, leaving his studies to become a Graphic Artist in the textiles industry where he designed logos and cartoons for screen printing and embroidery. In 2005 he volunteered as an Art Facilitator at a Disability service, eventually making a career in that industry. In 2012 Adam meet Graham whilst joining the burgeoning coffee scene in Newcastle, Australia. Adam is currently a Disability Support worker and part-time artist and photographer.

“This is an excellent book on careers in STEM (Science, Technology, Engineering, Math), aimed at, ‘anybody contemplating or doing a doctorate in engineering or one of the physical sciences’. In addition, this book will be of interest to those interested in the topics discussed, including ethics in science, interactions between students and supervisors, goal setting, balance of one’s work and personal life, and dealing with injustice. … Whimsically illustrated, footnotes and references for further reading conclude every chapter … .” (Robert Buntrock, ChemEd X, chemedx.org, August, 2017)
“This is an outstanding book on career development, especially for those in the sciences. … The sections of the book cover elements related to pursuing a doctorate, advice for mentors and parents of doctoral students, and career development, with coverage of positions in both academia and industry. Ample illustrations appear throughout the work. … Summing Up: Recommended. Upper-division undergraduates and above; faculty and professionals.” (R. E. Buntrock, Choice, Vol. 54 (9), May, 2017)
Buy options