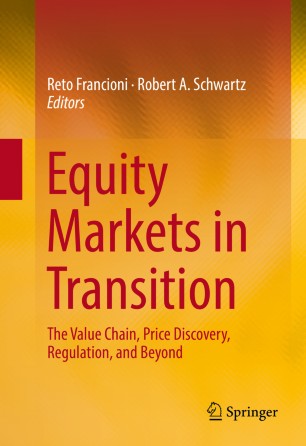 The Value Chain, Price Discovery, Regulation, and Beyond

This book underscores the complexity of the equity markets, the challenges they face, and the fact that they are still a work in process.  Three interacting forces drive market change: competition, technology change, and regulatory change.  The markets have one major objective in particular to achieve: the delivery of accurate price discovery for both traders and the broader market.  Are we getting it?  Are competition, technology, and regulation acting together to improve market quality, or are they adding to the complexity of the markets and making accurate price discovery harder to achieve?  The difficulty of addressing these issues and reaching a consensus regarding public policy is reflected in the diverse opinions expressed in this book.

From an institutional perspective, the volume’s contributors highlight the interconnectedness of all aspects of the internal and external environment within which exchange organizations act. Equity Markets in Transition underscores how technological evolution and recent regulatory changes have influenced the business, and how these developments have opened new possibilities for exchange organizations and for equity markets as a whole, including such issues as the impact of equity markets on job creation.

The book combines both a theoretical and a practical approach. Part I presents a theoretical overview of the international equity market business, including an overall description of the value chain of stock trading that includes deep dives on every decisive step. Part II contains contributions from various business specialists who have specific practical and academic knowledge of the different steps.  Equity Markets in Transition represents a unique combination of theoretical and practical analysis that offers first-hand insights on all relevant interactions and interrelations among the various parts of the exchange business, with an emphasis on facilitating analysis of the status quo and of emerging trends regarding business models, regulation, and the development of the competitor, customer and investor sides.

Reto Francioni has been a professor of applied capital markets theory at the University of Basel since 2006. Since 2013, he has been a member of the Board of Directors of UBS Group and since June 2016, he is Chairman of the Supervisory Board of Swiss International Airline as well as Senior Independent Director of the Coca-Cola HBC AG.

Reto Francioni was CEO of Deutsche Börse AG from 2005 to May 2015. From 2002 to 2005, he was Chairman of the Supervisory Board and President of the SWX Group (Stock Exchange of Switzerland). Reto Francioni was co-CEO and Spokesman for the Board of Directors of Consors AG from 2000 to 2002. Between 1993 and 2000, he held various management positions at Deutsche Börse AG, including that of Deputy CEO. From 1992 to 1993, he served in the corporate finance division of Hoffmann-La Roche as a member of the Directorate. Prior to this, he was on the executive board of Association Tripartite Bourses and worked, from 1985 to 1988, for the former Credit Suisse. Reto Francioni started his career in 1981 in the commerce division of Union Bank of Switzerland. He studied and earned his doctorate in law at the University of Zurich.

Robert A. Schwartz is the Marvin M. Speiser Professor of Finance and University Distinguished Professor in the Zicklin School of Business, Baruch College, CUNY.  Before joining the Baruch faculty in 1997, he was Professor of Finance and Economics and Yamaichi Faculty Fellow at New York University's Leonard N. Stern School of Business, where he had been a member of the faculty since 1965.  In 1966, Professor Schwartz received his Ph.D. in Economics from Columbia University.  His research is in the area of financial economics, with a primary focus on the structure of securities markets.  He has published dozens of refereed journal articles, twelve edited books, and eight authored books, including Micro Markets: A Market Structure Approach to Microeconomic Analysis (Wiley & Sons, 2010); Mastering the Art of Equity Trading Through Simulation: The TraderEx Course (co-authored with Gregory Sipress and Bruce Weber,Wiley & Sons, 2010); The Equity Trader Course (co-authored with Reto Francioni and Bruce Weber, Wiley & Sons, 2006); and Equity Markets in Action: The Fundamentals of Liquidity, Market Structure and Trading (co-authored with Reto Francioni, Wiley & Sons, 2004).  He has served as a consultant to various market centers, including the New York Stock Exchange, the American Stock Exchange, Nasdaq, the London Stock Exchange, Instinet, the Arizona Stock Exchange, Deutsche Börse, the Bolsa Mexicana and the Istanbul Stock Exchange.  From April 1983 to April 1988, he was an associate editor of The Journal of Finance, and he is currently an associate editor of the Review of Quantitative Finance and Accounting and the Review of Pacific Basin Financial Markets and Policies, and is a member of the advisory boards of International Finance, The Journal of Trading and on the editorial board of International Journal of Portfolio Analysis & Management (IJPAM).  In December 1995, Professor Schwartz was named the first chairman of Nasdaq's Economic Advisory Board, and he served on the EAB until Spring 1999. He is developer, with Bruce Weber and Greg Sipress, of the trading and market structure simulation, TraderEx. In 2009, Schwartz was named the first recipient of the World Federation of Exchanges’ annual Award for Excellence.