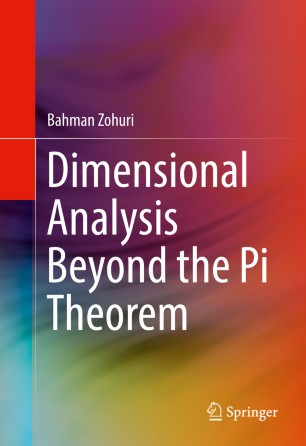 Dimensional Analysis Beyond the Pi Theorem

Dimensional Analysis and Physical Similarity are well understood subjects, and the general concepts of dynamical similarity are explained in this book. Our exposition is essentially different from those available in the literature, although it follows the general ideas known as Pi Theorem.  There are many excellent books that one can refer to; however, dimensional analysis goes beyond Pi theorem, which is also known as Buckingham’s Pi Theorem. Many techniques via self-similar solutions can bound solutions to problems that seem intractable.

A time-developing phenomenon is called self-similar if the spatial distributions of its properties at different points in time can be obtained from one another by a similarity transformation, and identifying one of the independent variables as time.  However, this is where Dimensional Analysis goes beyond Pi Theorem into self-similarity, which has represented progress for researchers.

In recent years there has been a surge of interest in self-similar solutions of the First and Second kind.  Such solutions are not newly discovered; they have been identified and named by Zel’dovich, a famous Russian Mathematician in 1956. They have been used in the context of a variety of problems, such as shock waves in gas dynamics, and filtration through elasto-plastic materials.

Self-Similarity has simplified computations and the representation of the properties of phenomena under investigation.  It handles experimental data, reduces what would be a random cloud of empirical points to lie on a single curve or surface, and constructs procedures that are self-similar.  Variables can be specifically chosen for the calculations.

Dr. Bahman Zohuri is founder of Galaxy Advanced Engineering, Inc. a consulting company that he formed upon leaving the semiconductor and defense industries after many years as a Senior Process Engineer for corporations including Westinghouse and Intel, and then as Senior Chief Scientist at Lockheed Missile and Aerospace Corporation. During his time with Westinghouse Electric Corporation, he performed thermal hydraulic analysis and natural circulation for Inherent Shutdown Heat Removal System (ISHRS) in the core of a Liquid Metal Fast Breeder Reactor (LMFBR). While at Lockheed, he was responsible for the study of vulnerability, survivability and component radiation and laser hardening for Defense Support Program (DSP), Boost Surveillance and Tracking Satellites (BSTS) and Space Surveillance and Tracking Satellites (SSTS). He also performed analysis of characteristics of laser beam and nuclear radiation interaction with materials, Transient Radiation Effects in Electronics (TREE), Electromagnetic Pulse (EMP), System Generated Electromagnetic Pulse (SGEMP), Single-Event Upset (SEU), Blast and, Thermo-mechanical, hardness assurance, maintenance, and device technology. His consultancy clients have included Sandia National Laboratories, and he holds patents in areas such as the design of diffusion furnaces, and Laser Activated Radioactive Decay. He is the author of several books on engineering and heat transfer.