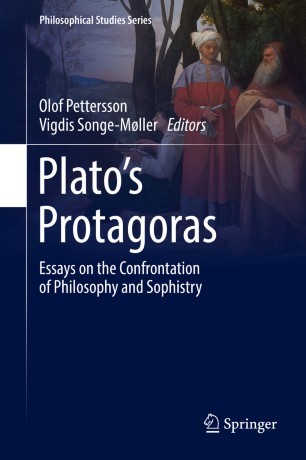 Essays on the Confrontation of Philosophy and Sophistry

This book presents a thorough study and an up to date anthology of Plato’s Protagoras. International authors' papers contribute to the task of understanding how Plato introduced and negotiated a new type of intellectual practice – called philosophy – and the strategies that this involved. They explore Plato’s dialogue, looking at questions of how philosophy and sophistry relate, both on a methodological and on a thematic level.

While many of the contributing authors argue for a sharp distinction between sophistry and philosophy, this is contested by others. Readers may consider the distinctions between philosophy and traditional forms of poetry and sophistry through these papers. Questions for readers' attention include: To what extent is Socrates’ preferred mode of discourse, and his short questions and answers, superior to Protagoras’ method of sophistic teaching? And why does Plato make Socrates and Protagoras reverse positions as it comes to virtue and its teachability?

Olof Pettersson is postdoctoral fellow at the Department of Philosophy, University of Bergen. Besides his dissertation on Plato’s notion of appetite, he is the author of several articles on Plato and is published in a range of international journals. His focus of research is ancient philosophy with a particular interest in Plato’s notion of non-argumentative means of influence and their linguistic underpinnings. Currently he works on a project on Plato’s critique of language.

Vigdis Songe-Møller is professor emerita at the Department of Philosophy, University of Bergen. She is author of Philosophy Without Women. The Birth of Sexism in Western Thought and two volumes on pre-Socratic philosophy. Her focus of research has been feminist interpretations of ancient Green texts, especially by Hesiod, Anaximander, Parmenides, and Plato. She leads the research project Poetry and Philosophy. Poetical and Argumentative Elements of Plato's Philosophy.