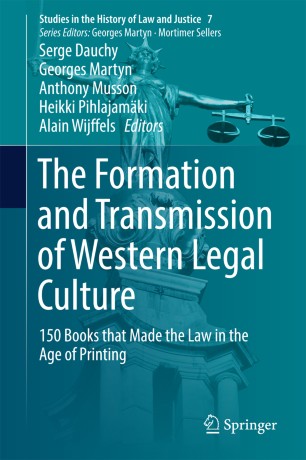 The Formation and Transmission of Western Legal Culture

150 Books that Made the Law in the Age of Printing

Part of the Studies in the History of Law and Justice book series (SHLJ, volume 7)

This volume surveys 150 law books of fundamental importance in the history of Western legal literature and culture. The entries are organized in three sections: the first dealing with the transitional period of fifteenth-century editions of medieval authorities, the second spanning the early modern period from the sixteenth to the eighteenth century, and the third focusing on the nineteenth and twentieth centuries. The contributors are scholars from all over the world. Each ‘old book’ is analyzed by a recognized specialist in the specific field of interest. Individual entries give a short biography of the author and discuss the significance of the works in the time and setting of their publication, and in their broader influence on the development of law worldwide. Introductory essays explore the development of Western legal traditions, especially the influence of the English common law, and of Roman and canon law on legal writers, and the borrowings and interaction between them.

The book goes beyond the study of institutions and traditions of individual countries to chart a broader perspective on the transmission of legal concepts across legal, political, and geographical boundaries. Examining the branches of this genealogical tree of books makes clear their pervasive influence on modern legal systems, including attempts at rationalizing custom or creating new hybrid systems by transplanting Western legal concepts into other jurisdictions.

Serge Dauchy, PhD (Ghent 1991), Habilitation Law (Lille 1997), is senior research fellow of the French CNRS and was director of the ‘Centre for judicial history’ at the University of Lille until 2014. He is Director of the Lille Doctorate School in Legal and Political Sciences since 2009 and professor of legal history at the University Saint-Louis of Brussels.