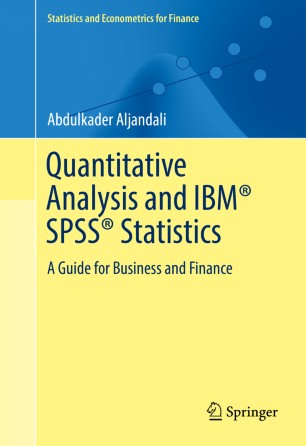 A Guide for Business and Finance

Part of the Statistics and Econometrics for Finance book series (SEFF)

This guide is for practicing statisticians and data scientists who use IBM SPSS for statistical analysis of big data in business and finance. This is the first of a two-part guide to SPSS for Windows, introducing data entry into SPSS, along with elementary statistical and graphical methods for summarizing and presenting data. Part I also covers the rudiments of hypothesis testing and business forecasting while Part II will present multivariate statistical methods, more advanced forecasting methods, and multivariate methods.

IBM SPSS Statistics offers a powerful set of statistical and information analysis systems that run on a wide variety of personal computers. The software is built around routines that have been developed, tested, and widely used for more than 20 years. As such, IBM SPSS Statistics is extensively used in industry, commerce, banking, local and national governments, and education. Just a small subset of users of the package include the major clearing banks, the BBC, British Gas, British Airways, British Telecom, the Consumer Association, Eurotunnel, GSK, TfL, the NHS, Shell, Unilever, and W.H.S.

Although the emphasis in this guide is on applications of IBM SPSS Statistics, there is a need for users to be aware of the statistical assumptions and rationales underpinning correct and meaningful application of the techniques available in the package; therefore, such assumptions are discussed, and methods of assessing their validity are described. Also presented is the logic underlying the computation of the more commonly used test statistics in the area of hypothesis testing. Mathematical background is kept to a minimum.

Abdulkader Aljandali, Ph.D., is a Senior Lecturer in Quantitative Finance and Business Forecasting at Regent’s University London. He acts as a visiting professor at overseas institutions in Canada, France, and Morocco.

Abdulkader Aljandali, Ph.D., is a Senior Lecturer in Quantitative Finance and Business Forecasting at Regent’s University London. He acts as a visiting professor at overseas institutions in Canada, France, and Morocco.

“In the fast moving and ubiquitously connected world of business today, managers are overwhelmed with infinite information and big data which do result in an information overload. There is ever more need for better understanding and interpreting quantitative data that is of relevance. Aljandali's book aims to make this often daunting task simple for both students and practitioners. The user friendly approach goes well beyond the simple manuals provided by SPSS.” (Professor Marc Opresnik, Chief Research Officer Kotler Impact, Inc. and Chief Executive Officer Kotler Business Program)

“This excellent book is a must-read for any business student and practitioner who wants to develop their applied quantitative skills. The numerous practical examples make this book especially useful to learn new techniques. Any unnecessary jargon is avoided and the focus is on applying the techniques. The author guides the reader through the numerous examples with ease. This is not a statistics textbook but a very useful book for students and managers who need to learn, in the shortest time possible, how to analyse their own data using sophisticated quantitative techniques with SPSS.” (Dr. Sven Kuenzel, Reader in Marketing, Director of the Centre for Communication and Consumption Research [C3ORE], University of Greenwich Business School)

“This is an excellent textbook that integrates statistical techniques with real life examples via the usage of a commonly used software as SPSS. This book will be more than invaluable for students looking to use econometrics and statistics in their undergraduate studies. The user-friendly approach and the variety of examples will be much appreciated especially by those seeking to improve their understanding  but still struggle to analyse economic and financial data.” (Dr. Christos Kallandranis, Lecturer in Finance, Department of Economics, University of Patras)