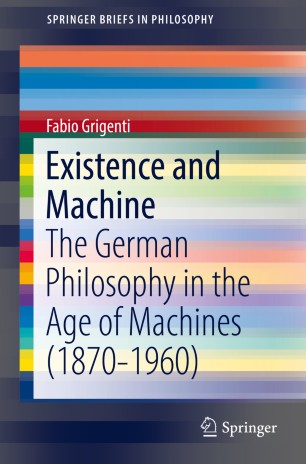 The aim of this work is to provide a preliminary analysis of a much more far-reaching investigation into the relationship between technology and philosophy. In the context of the contemporary German thought, the author compares the different positions of Karl Marx, Martin Heidegger, Ernst and Friedrich Jünger, Arnold Gehlen and Gunther Anders. The term “machine” is used precisely to mean that complex material device assembled in the last quarter of the 18th century as a result of the definitive modern refinement of certain fundamental technologies, i.e. metallurgy, precision mechanics and hydraulics. The “machine” discussed here arrived on the scene of man’s history when the processes of spinning and weaving were entrusted to semi-automatic means; when the water wheels used in mills, hitherto always made of wood, were supplanted by the metal levers of the steam engine; and especially when the steam engine was connected to the weaving frames, to the metalworking hammers, and to other machines used to manufacture other machines in an endless reiteration of assemblies and applications, the enormous outcome of which is what subsequently came to be described as “mass production”. The philosophers discussed here were also dealing with the type of machine described above and in their works she we can identify three model images of this idea of machine. These images have been drawn on at various times, also outside the realms of philosophy, and they still provide the backdrop for our knowledge of the machine, which has circulated in a great variety of languages.