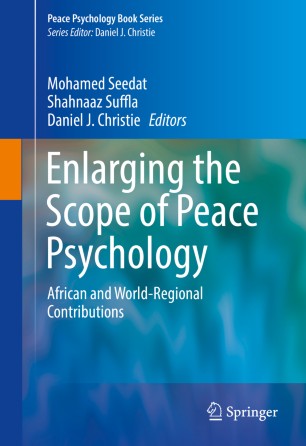 Enlarging the Scope of Peace Psychology

With the major goal of building an inclusive international community that promotes peace-related research and action, this volume reflects on local, national and global peace engagement and works towards transdisciplinary understandings of the role of psychology in peace, conflict, and violence.  Drawn primarily from the 14th Biennial International Symposium on the Contributions of Psychology to Peace, the chapters focus on peacemaking--or the pursuit of harmony in human relations--and peace building--or equity in human relations--with a special emphasis on voices from typically underrepresented areas in psychology, such as the Global South.

In order to move beyond a Western-centered idea of peace psychology, the volume is divided into two major parts. The first half of the volume puts an emphasis on peace psychology research and praxis in a number of geohistorical contexts, including Malaysia, Northern Ireland, Thailand, and Kashmir, that bear on conflict, harmony and equity in human relations. Chapters in the second half of the volume fulfill the mandate of the Biennial Symposia; namely, to create more equity in the production of peace theory and praxis by bringing forward the voices of scholars and change agents that are often unheard in peace discourses, including a number of scholars and chapters from South Africa. Additionally, throughout the chapters, the authors and editors of the volume emphasize emancipatory agendas as an important alternative to militarism and state-sponsored violence.

With the aim of bringing forward voices from cultures and situations that are typically not included or highly visible in peace discourses, Enlarging the Scope of Peace Psychology: African and World-Regional Contributions is a thought-provoking, timely, and informative work. Psychologists, anthropologists, sociologists, political scientists, activists, public-policy makers, and all those interested in promoting peace and justice, are sure to find this an invaluable and illuminating resource.

Mohamed Seedat is a community-centred intervention development and violence prevention researcher. He is a vision-making and strategic development facilitator and life-oriented academic coach, mentor and post-graduate student supervisor. With a background in liberatory and critical community psychology, public health and trans-disciplinary thought, he writes in areas of community engagement, social connectivity, injury prevention and intellectual traditions in science. He is currently leading in a multi-country study on safety, peace and health promotion and the establishment of safety demonstration sites across various African countries. Mohamed is also conducting work on the making of communities and the determinants of safety and peace. Shahnaaz Suffla is trained as a clinical psychologist, and is a senior scientist within the Medical Research Council-University of South Africa, Safety and Peace Promotion Research Unit. Her research interests include issues related to gender, peace, conflict, and violence and injury prevention. Her work draws largely from community and peace psychology, as well as from the public health perspective. She has been involved in the training of post-graduate psychology students for a number of years, and remains actively engaged in organised psychology in South Africa. Daniel Christie is Professor Emeritus of Psychology at The Ohio State University and Fulbright Specialist in Peace and Conflict Studies. He is co-editor of Peace, Conflict, and Violence: Peace Psychology for the 21st Century (2001), and series editor of The Peace Psychology Book Series. Christie has worked to define, advance, and position peace psychology as a foundational discipline for programs in peace and conflict studies around the world, and has served as President of the Peace Psychology Division of the American Psychological Association.